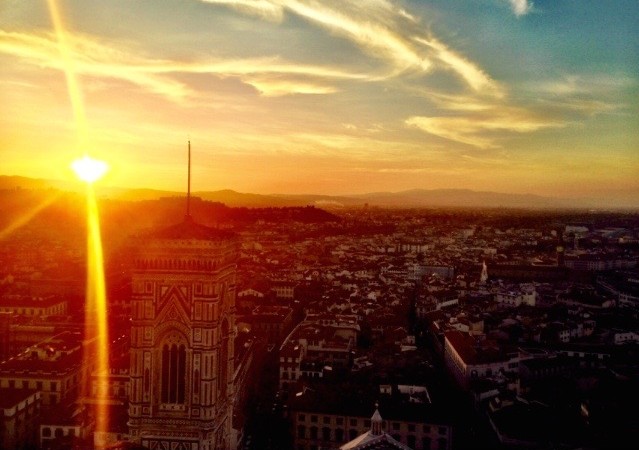 Celebrating my one-month anniversary of living in Italy! It’s weird to say that because I feel like my time here seems to have had flown and at the time it’s like I’ve been here for a year.

The Italian culture has finally infiltrated my American ways, and I slowly see myself fitting in more and more with the people around me. Don’t get me wrong, I am definitely far from being an authentic Italian…VERY far.

Culturally speaking, the adjustment has been harsh and quick. Funny enough, I have discovered the Italians frequently use the term “like a New Yorker” to describe a broad list of actions done quickly and frankly…rudely. I find this pretty amusing since the term is generally used for all Americans and not just New Yorkers. I have found however that I DO in fact fall into these categories more than I assumed I would.

You might be described as a “New Yorker” here in Italy if you do any of the following:

-Walk ‘at the speed of light’ to get from place to place…passing dozens of people while doing it.

-…Actually make that avoiding eye contact with any passer-by in general.

Those are just a few examples of the stereotypes that I’m both dealing with and proving here in Florence. But who can blame me right? I’m just an American!

On another note, we are quickly approaching midterms, which seems nearly impossible. I have started my ‘intermediate’ level of Italian and I have to say that I’m very lost. I feel like I should be retaking beginners because it went by so quickly, and now my class is completely in Italian. No worries though, I will get through the second half of the class by trying to interpret the hand gestures of my Italian teacher and giving pained glances at my neighbor as we both feebly attempt to answer each question.

What I have deterred is that the classes, although less frequent in the week than my classes back in the States, are much longer. Each lesson is two and half hours, which sounds OK except for when you realize that your attention span is barely ready for an hour class.

However, that being said, it has definitely been a completely new experience learning about history in Europe. I’m enrolled in a European literature class, and we have been reading several novels from World War II. The Italian perspective of this war is so vastly different than when we learn it at home…it’s seems like a completely different war. Professors refer back to the United States, and ask us to compare what we know to what we are learning now.

I’m learning that this experience truly is priceless. Both culturally and academically, I am realizing that what I call home is such a small place compared to the rest of the world. People create their own homes all over the world where they have their own traditions and their own lives. They eat dinner at 9 PM, pick up their kids on a Vespa, and hang their clothes out to dry; and that doesn’t make them wrong.

People tell you all the time growing up that there is a whole world out there to explore, and I understand why some people are afraid to do it. It is humbling and real to see the amount of people in the world that don’t even know your hometown exists—and on top of that, don’t care. But with that being said, I’m so eager to explore it more.