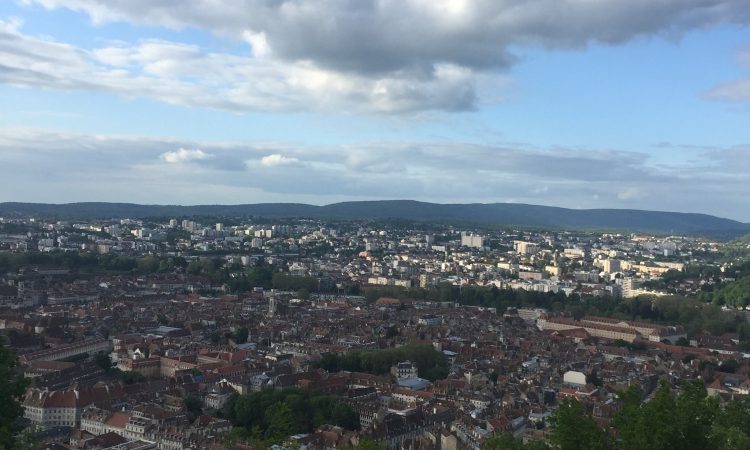 The Act of Leaving

It’s taken me longer than it should have to be able to write this post. I’ve been putting it off. And I actually wrote two or three other drafts that I completely scrapped because I hated them so much. For some reason, I feel like I’ve just needed this post in particular to be perfect. I want my words to be perfect. I want all of you reading this to read my words and somehow be teleported into my mind’s eye. So here goes nothing.

I left Besançon on May 21 at 9:56 a.m. That is the exact time that my train at Gare Viotte pulled out of the station. I think I left Besançon the only way I really knew how to: in a rush, without thinking about what was actually happening.

I had been out until 5 a.m. the night before at a party at my friend’s apartment. Most of my friends were there. It was a great last hurrah after spending the previous week in complete denial. The thought of leaving was making me sick and making my head spin.

Needless to say, at this party we spent the whole night drinking a bit and laughing a lot. We all danced and joked and talked and reminisced. We talked about where we would go after we left, who was leaving first and when, what those who were going to be staying were doing in the meantime and after the rest of us cleared out.

The thought of leaving all the friends I had made was too much to bear. I wouldn’t have gotten through the semester without the support of my fellow Americans, who understood the struggle of trying to fit in to French culture and society, trying not to seem too American and trying to manage our way speaking the native language all at once. It was nice having people around who could always relate to you and who could help you out along the way. It’s also nice to know that seeing each other again is just a drive to Toronto away. I will never forget all of the other friends I made abroad, who come from all over the world, who have made such a lasting impact on me. I don’t know if they realize how much they have affected my world view for the better and how much I feel that they have made me a better person because of it. Though there was some comfort in having fellow Americans around and being able to easily speak English at times when I felt my brain would implode or overheat from overuse and trying to speak French, there were certainly more times than few where speaking French to all my non-anglophone friends was maybe even better. That’s what we were in France for anyway. Communicating with these friends and hanging out with them meant practicing. They made my French better, but they also taught me so much about where they come from, the way their lives are or were back home, and I got to learn a few Chinese, Korean, Thai, and Indonesian words/phrases along the way. I above all learned from the people I lived with. But they should know this. Ben, like my other American friends, had already gone what I had been going through the semester before. I was scared and felt a little alone and was anxious to try to speak French. But we spoke in French together anyway despite our mother tongue, and he helped me when I didn’t know what I was saying. Laura taught me more about French culture and language and people than most of my professors did, and we got to bond and share music at the same time. Even if there were some language barriers at times, more often than not we would find ourselves laughing at something, whether it be stupid YouTube videos or Ben (you know it’s out of love). And Joelle was the second mother I needed when I really felt like I needed someone. She also taught me more about French culture and language than I ever could have possibly imagined. And my time abroad was seriously enriched because I lived with these people and from having known them. I miss them a lot. They know this too. And I will probably forever be nostalgic about my time living at 124 Grande Rue. It kills me to know that we will never live in those same circumstances ever again. I wish I could go back for a few days or a few weeks just to relive it again.

What really sucks about the act of leaving is knowing that you are leaving so many people you’ve grown to love behind, a life you’ve made yourself behind. Being back home has made me realize how foreign it all was. I feel like living in Besançon feels more like a dream than anything. A really great dream that I lived for a little while, then blinked one day and suddenly it was over.

I think it goes without saying that I began to cry as my train pulled out that sunny Saturday morning. I am at least a little thankful that I woke up late and had to rush out of the apartment so that I didn’t really have a formal goodbye with all that I was leaving. It was very quick and last minute, and Joelle really put the pedal to the metal as we raced to catch my train. But as I hugged her goodbye and held her hand it all became that more real and I had to face the fact I was leaving. I held it in until I got on the train and thank God my friend Jesse was there by chance otherwise I would have been bawling. Before the train pulled out Joelle opened the door one last time as tears were streaming down my face and I was trying to rearrange my luggage. She snapped a picture and I really would love to see what that looks like: me forcing a smile behind eyes welled up in tears, waving goodbye for the last time for who knows how long. The best way I could describe leaving was like the worst breakup ever, or like losing a best friend. I felt like my heart was being ripped from my chest. I felt homesick for Besançon the second the train started to move.

Having the opportunity to go visit family in Croatia definitely softened the blow and the heartache of leaving Besançon. I got to explore Zagreb and Osijek (the city where my dad grew up) and I got to discover so much about my family as well as myself there, too. I helped my cousins speak English and they helped me with whatever very basic Croatian I’m familiar with (‘bok’ means ‘hello’; ‘volim te’ means ‘I love you’; ‘kako si’ means ‘how are you?’; ‘ja sam se vratila kući’ means ‘I came home,’ which I had to repeat at least 15 times before I memorized how to say it so that I could say it to my dad and grandma upon arriving home; and the letter ‘s’ on its own means ‘with’ … that I will never understand). I even got to a ride a motorcycle! (Thanks Sale). I saw a lot of cool places and met a lot of cool people and got to connect with family that I’d never met before. I don’t know how many people get to say they’re able to do that, but in any case I’m very fortunate. And also needless to say, I was also exceptionally sad to leave them too; it felt like connecting with a part of myself I never would have been able to otherwise, flirting with a life that could have been and then I had to pack my bags once again and leave a short 10 days later. I knew that if I looked my grandma’s sister Mira in the eyes as I hugged her goodbye for the third time, I would start bawling then, too, so I refrained because otherwise I knew I wouldn’t be able to stop.

Goodbyes are never easy. Leaving home in New York sure as hell wasn’t easy when I was leaving for France. But then you adjust and you make these places your home and the process of leaving becomes just as hard from the other side. In studying abroad and traveling, I learned so much about myself and what I am capable of, what it is I need help with, and that it is always possible to find a solution, and that there are always people there to help you and guide you and hug you or hold your hand when you need it most. The semester was hard for a lot of different reasons; adjusting to life in France, dealing with loss. But the goods outweighed the bad. You meet people. You see these amazing, different parts of the world. You go out of your comfort zone. You learn how to speak a second language, and you learn about dozens of others. You create friends from all over the world and suddenly you find that you have so many places and people to visit in the future. There are so many places you have to return to, lots of memories to relive, and lots of new memories to create.

A very new friend in France told me on my last night in Besançon that the Germans have a proverb that says “you always meet twice in life.” I hope that saying is true for so many things. For all the people I met, for all the places I visited, for all the feelings I felt, for all the experiences I had.

I’ll miss Croatian food and Croatian hospitality and my family. I’ll miss speaking French. I’ll my cute little room at Joelle’s with my window view of la Colline de Chaudanne. I’ll miss watching French sitcoms with Joelle and learning about the adventurous experiences she had as a traveler and English teacher. I’ll miss messing around with Ben and Laura at our kitchen table. I’ll miss the 5 bus because it was the only line I got a handle of over my five-month stay in Besançon. I’ll miss the people and the places like the Gare d’Eau or Place Granvelle. Maybe I won’t miss the rain so much. The sun of New Paltz has been pretty nice lately.

There is also a whole lot of comfort in knowing how easy it was to come back to New York and New Paltz. Coming home you don’t expect everything and everyone to be the same, but it is and they are. And though I may feel different for a lot of different, better ways, I haven’t really changed all that much. Everything is more or less the same, and after five months of complete unfamiliarity, there is a lot to be gracious for in the familiar. This was my home before I left and this is still my home now. I’ll probably miss Besançon and Europe for a long time and feel nostalgic whenever a memory pops back into my head, but being home in New York has never felt sweeter.

I’m grateful for the memories I made abroad. And someday I know I’ll come face to face with all of it again, and maybe the second time around I won’t be so scared. As the famous Pooh quote goes, and I don’t know that I could find a better quote that speaks to me so well than in this moment:

“How lucky I am to have something that makes leaving so hard.”

I’ll end this with a song, for nostalgia’s sake, and for knowing that the world isn’t as big as it may seem: