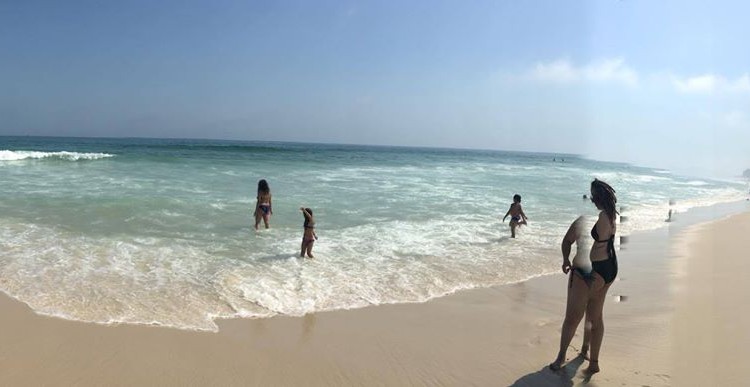 Getting off of the plane in Sao Paolo, Brazil on January 6th, 2016 was like stepping into a whole new world, where I didn’t understand anything that was going on around me. It was the first time in my entire life where I couldn’t speak the language, Portuguese. Coming from a background of English and Spanish, I had to work hard to keep up. Some of the words in the Sao Paolo airport shared the same roots with Spanish – estaçáo meant estación and pessoas translated to personas – so I was able to get a round a bit. What stunted me was oral communication… I knew nothing. At this point, I was aware that I was in a completely different country with a completely different language and that I was going to be here for another 6 months. It all happened so fast. At one moment, I was in New York, waiting in line and saying goodbye to my family members, and the next I was in Brazil.

From Sao Paolo, I needed to board a connecting domestic flight to Rio de Janeiro, which meant that I had to find my own way around the international airport. Luckily, many of the workers in the airport spoke a little bit of English, which at the point seemed easier to communicate with since everyone was just confused by my Spanish (later I would find that what people prefer is Portunol, a mix of Spanish and Portuguese that helps foreigners better understand Brazilians.) After finding the right terminal, I geared right to where the small plane that would take me to Rio awaited. While on the line, I noticed a guy on SnapChat, writing English. I instinctively tapped him on the back, eager to talk to someone who could take be back home. His name was Deonte and as it turned out, he was also studying abroad at a PUC in Curibita, Brazil, and was originally from a small town in California, but was traveling to Rio in order to see what was up. I took the opportunity to introduce myself and learn about what Brazil was like so far for him — he’d been in the country for a total of 6 months. At that point, we boarded the plane. I sat in the 13th row, next to the window.

The best part of sitting next to the window was that domestic flights fly significantly lower than international flights and January 6th was a clear sky kinda day. As I entered Rio de Janeiro from above, I could clearly see the outlines of the city’s skylines, highlighted by massive, colorful favelas interspersed along the city’s skyline. Unfortunately, I kept looking for Christ the Redeemer as my guiding star while staring out of the window, and to no avail I couldn’t find it.

Once landing in Rio things got busy. I stepped out of the terminal and saw that PUC’s concierge was standing right in front, holding up a sign for visiting students to see. Thankfully Deonte was with me to talk with the man because if not, I wasn’t sure how I would have got around. More students began piling in and I got acquainted with everyone around me by means of speaking English. It was then that I learned just how wide speaking English spanned.

We piled into the car and got driving to drop all of the girls off. When we got to my apartment, I was stunned. I was going to live in the famous bairro of Copacobana, on the boarder of Ipanema, for the next 5 months, right on the beach. I could literally walk 1 minute and be on the beach. Upstairs, I noticed that my room had a balcony and I fell in love. I also was so happy that I got paired with a girl from New York as well! As soon as I got in, we decided to go to the beach and drink some capirinhas, because, what better way to relax after a 17 hour flight?

Stay tuned for more to come! 🙂