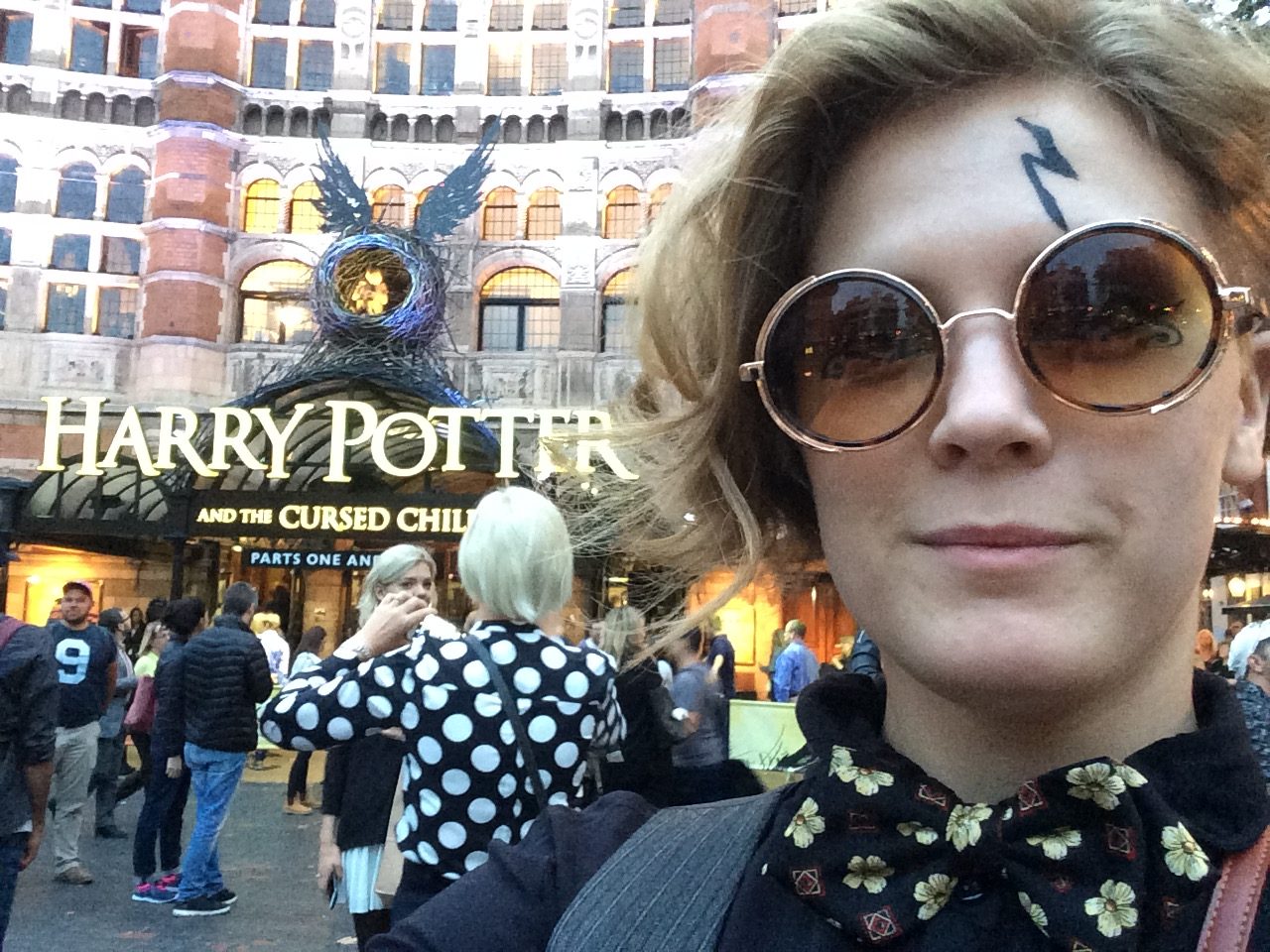 “You Alright?” Phraseology and Obama Burgers

I know I said that I felt at home before… but that was before I casually recognized the details of my neighborhood going by from the second story of the bus. That was before I decided not to buy tunafish at Sainsbury’s because I could get it a few pence cheaper at Londi’s. That was before I made friends in class, joined clubs, and realized I could navigate through Bankside in London without a GPS. Now I know the ropes. I know where I can get a nice cheese toastie and latte for under 5 quid. I know to get cheap produce from the local market, and cook it quickly for optimum not-going-badness. I really didn’t know what I was talking about before – Home is when you’re familiar with a place. I’m still sometimes lonely, but it always helps to listen to music, explore, meet new friends, take a walk. I’m even a part of a few clubs now! Can’t wait to go out to pub with the Feminist Society!

For anyone feeling stressed out studying abroad, I’ve found it helps to remember that there are free counseling services on campus, and taking advantage of that is just like taking care of any other health problem – no shame! You deserve to take care of yourself. I’m pleased that health care in the UK is so comprehensive! I registered with the National Health Care and the campus health centre, and I was able to get my birth control refilled in under an hour – just a ten-minute doctor’s visit, a walk to a nearby chemist (pharmacist), and the few minutes it took for them to fill out my new prescription. And I got 6 months of it all at once, versus only being able to fill a month at a time at home – I’m so glad they make it easier to do responsible family planning here. The U.S.A. could take a hint, it’s not like it’s a highly addictive or dangerous substance… but anyways. Ahem.

Back to the culture.

It seems to me that the college culture of London’s Kingston suburbs is similar to that in the New Paltz area, but it’s much more diverse demographically. Most of the people I’ve interacted with at school are very liberal, as are my landlords and their my-aged kids. People are very interested to hear my thoughts on the election… a subject I’m not so fond of discussing these days. I just feel really embarrassed about my country, and they seem to agree that there’s good reason. …Then again, they did have Brexit over here, and now Scotland might vote on a new referendum to leave Britain. So…. political chats have become quite fun and rowdy amongst my friends.

Safety-wise, Kingston is considered “London’s safest borough!” This is reassuring, as I’ve taken to walking to and from school to keep in shape (an hour of walking each day to keep off those fresh and crispy fish and chips I’ve been eating like all the time). I notice that I feel much safer around the police, perhaps because they don’t carry firearms of any sort – just a billyclub, handcuffs, and I think mayyyyybe a taser? And somehow crime isn’t a problem here… hm. In London proper, I’m a little more cautious – apparently pickpocketing is a real problem there, so I make sure to travel with just my front-facing shoulder-purse (backpacks and designer pursey-bags are much easier to lift from). I haven’t had any trouble so far.

I’ve made friends, and they don’t hate my American accent (or they’re very polite and lying to me)! I learned from my new friend Ryan that if I say “semester,” I will sound super American (they call it a “term”)… there are several other words that seem normal to me, but they get very grinny about. It seems like students here are a lot more used to interacting with foreign students than we are in the United States. There is some fascination (especially regarding politics), but I feel pretty average among other Britons, as well as students from Italy, Israel, France, Greece, Poland, what have you – I feel like there’s nothing too exceptional about being from somewhere else.

One thing I have not gotten used to yet, is that people in London will often greet you with, “You alright?” which of course alarms my American brain, and I think, “Of course I’m alright! Do I look sick? Is something wrong with me?” And I feel like my “Yeah!” is always just the slightest bit defensive. But gradually it’s becoming more at home for me – when I get back to NY, maybe I can alarm my friends by asking them if they’re “alright!”

I’ve managed to see several shows at the Globe – a screening of The Passion of Joan of Arc with live orchestra, Macbeth, and Imogen (a reimagining of Shakespeare’s Cymbeline), all fantastic. There is something uncanny and magical about Shakespeare’s Globe, like it’s an ancient sacred site (even though I know it’s only a reconstruction). The “Groundling” experience (standing in the pit) was very exciting – we got to be very close to the actors, all of us looking up with our ciders and mulled wine. Even though my legs and lower back were a bit sore from standing for two hours, it was well worth the 5 pounds! It inspired me – I’d love to someday work on that stage, if I’m ever given the opportunity. More locally, I saw a heart-wrenching play directed by John Malkovich, The Good Canary, at the Rose Theatre (where I take my Shakespeare class!). Also only 5 pounds, this time for actual seats. The biggest singular expense of my trip was seeing Harry Potter and the Cursed Child: Parts One and Two at the Palace Theatre. At 300 pounds, this was a huge chunk of my theatre budget for two full-length plays back-to-back. But I had to. It was Harry Potter onstage, and I am a fan of Harry Potter. I did it because I might never have the opportunity again, I was eager to see some theatre magic in a world I loved… and boy, was there some incredible theatre magic. Considering that the script read like bad fan fiction and had way too many holes in its many plots, they did a brilliant job doctoring the awful writing with magnificent movement, music, and illusions. Ultimately, I don’t regret seeing it – just wish it hadn’t costed so much, because it wasn’t quite worth the outrageous price. At least I made an adventure of it, and I got to meet the cast outside afterwards and get a few autographs! In short, I’ve learned that most British theatre companies are very supportive of getting young people into theatres – Donmar Warehouse, for instance, has a Young and Free program where anyone under 25 (the age caps for most “youth” promos) can see the show for free. And theatres like the Young and Old Vic offer very cheap student tickets as well! It’s absolutely appalling how much easier it is for me to see professional theater here in London, than in my own state. I wish they would subsidize theatre in the USA… but that might take a long time to implement. They don’t see theatre as that necessary back at home… another thing that makes me like it here more, and less eager to come back.

And England… Oh, your food. People say your food is rubbish – they are just silly gooses. It’s kind of a foodie paradise up in here. There’s so much incredible world food available – Indian, Lebanese, Caribbean, Turkish, Cantonese, Korean, ET! CETERA! Your seafood is fresh. Your fish and chips are crispy. For some reason you have Obama Burgers… And I have yet to discover what, exactly, is “chip butty.” But I’ve definitely gotten to know the true value of an imperial pint… Thank goodness cider isn’t considered a sissy drink here. Because it is the best thing ever, and there are so many different kinds on this side of the pond… as well as some delightful drafts beers. Also very strange that you can buy a drink at the theatre, and there’s even a bar right on campus next to the library! Guess there just isn’t as much of a binge-drinking culture over here… everyone’s used to it much earlier in their lives. It ain’t no big thang.

Good job, also, with the copious delightful meat pies! There just aren’t a lot of serious meat pies available in the U.S., and I think we’re missing out. Forgive me for singing Sweeney Todd lyrics while I was eating that venison pie that once, I’ll try to control myself next time and be less obnoxious…

…Probably my most satisfying moment, cuisine-wise, was having cider with bangers and mash by the fireside, at a place called “The Albert,” a cozy historic pub in my neighborhood – I have never felt so English in my whole life, or tasted such luscious gravy.
Thanks, Britain. Thanks for being thoroughly entertaining and delicious, and teaching me all your wibbly-wobbly, timey-whimey secrets. I look forward to even more.

I guess I am alright after all! I'm Geneva Turner, and I'm studying abroad this fall in London at Kingston University as a double major in Theatre Arts Performance and Anthropology. I identify as a queer female theatre artist, actor, director, writer, and activist, and I hope to make the world a better place by collaborating with other artists to change the world. I have always wanted to go to London, and am very interested to see not just how the world sees the United States, but also to gain some perspective from people who may view the world differently than I do.

Next ArticleBattle with Customs