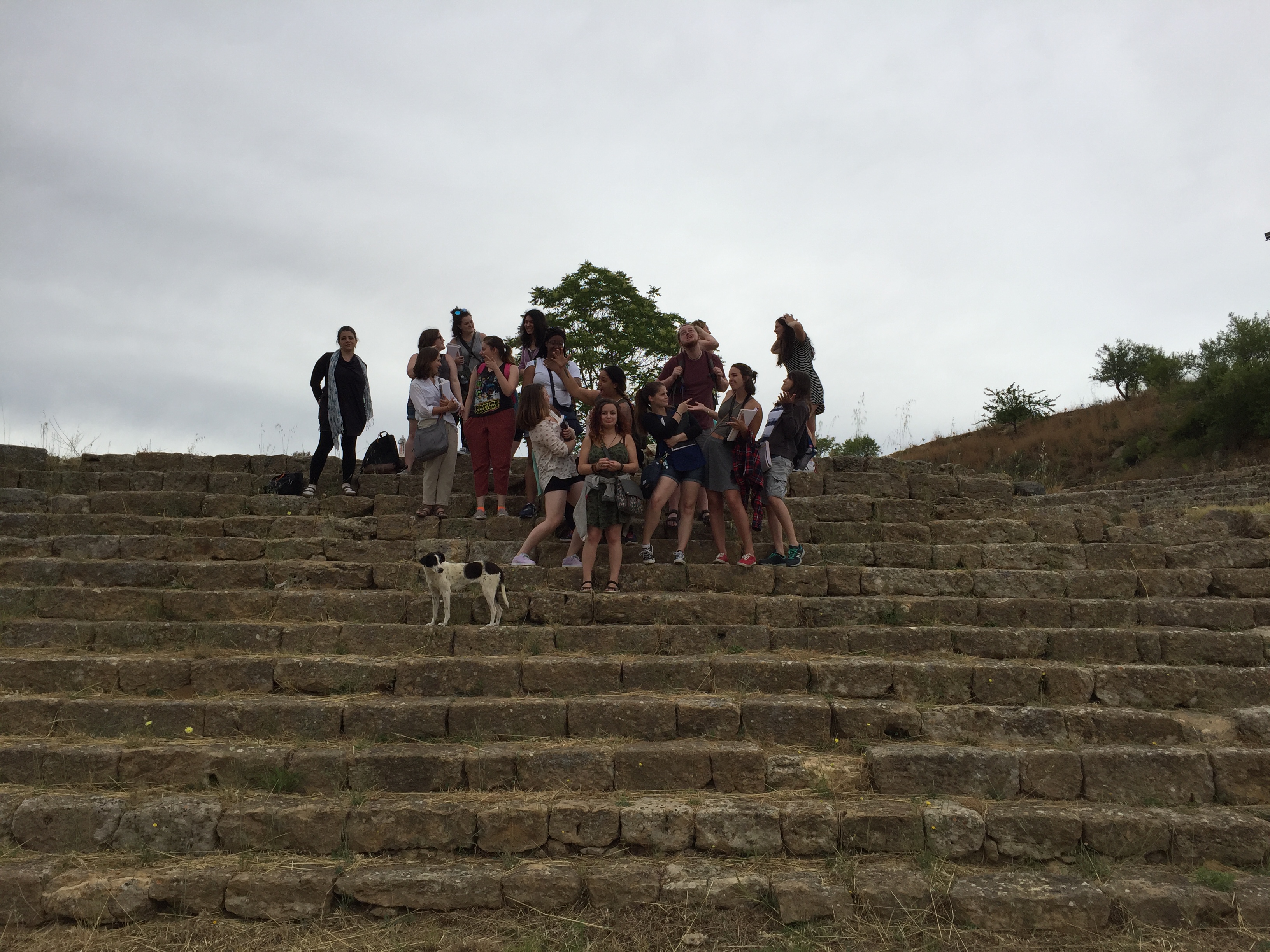 Expanding our holdings: pushing into the interior

Much like our ancient Greek counterparts, after we spent some time getting comfortable with our new surroundings along the coastline, it was time to explore the hinterland of Sicily. Our charter bus arrived this morning to whisk us off to the site of Morgantina, a city that began as an indigenous settlement, occupied by group known as the Sicels. Our chariot through Sicily

By the 6th century B.C., it began increasingly Hellenized, so much so that in the mid 5th century B.C., it was punished for its “Greekness” by the Sicel patriot Douketios, who sacked the original settlement on the Cittadella Hill. Soon afterward, between 450 and 425 B.C., the city was re-established on the nearby Serra Orlando ridge which commands an extraordinary view over the surrounding hilly countryside. Heading into the site of Morgantina on Plateia B, one of the original streets of the town. Note Mount Etna looming in the distance!

This was our first true active archaeological site in our travels through Sicily, and Morgantina allows one to get a true sense of the layout of an ancient Greek town because it was never built over at a later date, allowing one to explore everything from the remains of houses to major public buildings. The highlights for the students were clearly (a) getting to literally touch the past, rebuilding ancient buildings in their imaginations from the surviving foundations and walls and most importantly (b) being adopted by one of the admittedly slightly mangey dig dogs, who stars in the majority of our pictures (see her following us above). Morgantina particularly flourished during the third century B.C. under the control of the tyrants of Syracuse. Its prosperity is reflected in the many elegant homes built at this time that were equipped with some of the earliest surviving domestic wall-paintings and mosaics made of cut pieces of stone (tesserae) as well as indoor plumbing! The Hellenistic Fountain House at Morgantina

The main public square of the town, the agora (marketplace) that served as both the political and economic hub of the community was monumentalized as well during this period. Stoas (covered porticos, some with built-in shops and offices), a council house (bouleuterion), and an elaborate fountain house providing free water to the people were constructed to beautify and provide comfort to Morgantina’s inhabitants. Despite its many Greek types of buildings, when it came to sacred architecture, the population of Morgantina chose to follow indigenous traditions rather than construct typical Greek temples with stepped foundations, colonnades, etc. Given the importance of agriculture in region, it is no surprise that multiple sanctuaries were dedicated to Demeter, the goddess who gave grain to mankind. She was worshipped throughout southern Italy and Sicily, alongside her daughter Persephone, the queen of the underworld and the model for girls transitioning to womanhood through marriage. Gods with chthonic associations and those associated with beliefs in the afterlife, like Persephone, were widely popular in the western Greek world, and Morgantina is no exception with its own shrine in a central location of the agora, complete with a sacred well or pit called a bothros into which offerings were tossed to reach the infernal deities, including lead curse tablets. Our next stop was the archaeological museum in the nearby town of Aidone to see the objects that had been uncovered in the excavations at Morgantina. The intent was to focus on the collection’s highlights including brightly painted terracotta busts, bathtubs from the North Baths of Morgantina (the building with the first known domed roof in Greek architecture), and the famous Morgantina goddess, who likely represents Persephone. This limestone and Parian marble statue, sculpted between ca. 420-410 B.C., was clandestinely excavated from a sanctuary at Morgantina in the early 1980s and was purchased by the J. Paul Getty Museum for a breathtaking 18 million dollars. The piece had always been a point of contention between the Italian government and the Getty, and after it was conclusively proved that the limestone body of the goddess was carved from formations nearby Morgantina, a settlement was reached so that the statue could return back home again, where it is now a major point of pride for the community. Chatting with the locals in Aidone

Our visit to the museum coincided with the first Sunday of the month, when all state-run museums in Italy are free of charge, meaning that they are usually packed with locals taking advantage of the savings. It soon became readily apparent that the main focus of the museum was not the antiquities, but instead observing us exotic New Yorkers. A number of the students were approached by Italians who wanted to take pictures with them or talk to them about their relatives that live in the U.S.

Our final archaeological adventure of the day was a visit to the extraordinary Late Antique villa at Piazza Armerina, which contains over 32,000 square feet of well-preserved figural floor mosaics. It is currently believed to have been the country estate of a wealthy Roman Sicilian family, but some scholars argue that it belonged to the emperor Maximian (ruled 386-205) and his son Maxientius, the rival of Constantine for control of the western Roman empire. The complex consists of a clever arrangement of gangplanks, allowing one to walk high above the mosaic floors to see them better, as well as reconstructions of the walls and roof, thereby giving a true sense of what the original architectural spaces looked like. The mosaics feature a wide variety of iconography from mythological stories to representations of courtly life and favored aristocratic activities. The most incredible mosaic is that in the Great Hall, illustrating how animals from across the Roman world and beyond were captured and transported to Rome to be hunted for public entertainment in the Colosseum. Gazing over the Great Hunt mosaic at Piazza Armerina

After a very long and busy day, I was delighted to introduce the students to one of the more delightful ways to travel through Italy – by staying at an agriturismo, a working farm that offers room and board to tourists. We spent the night at an olive farm, and the students managed to get in a quick plunge in the freezing cold pool before our group dinner. I have so enjoyed watching the students bond together and develop meaningful friendships over the past few days, and I am impressed by how much they enjoy spending time with one another. A wedding reception was held at our agriturismo on the same evening as our group’s dinner, so we got to enjoy sharing a very formal waitstaff with them, complete with linen hand towels over their arms, which the students thought was very swanky. After four courses (!) of Sicilian specialties, I waddled back to my room to begin reading the student’s journals, which they write in each day as part of their assignments for the program. More than once, tears of joy came to my eyes as I read my students’ utterly sincere and detailed reactions to all that they had experienced since their arrival in Italy. I have been traveling overseas for so long that I had forgotten the feelings of wonder and awe that accompany being outside of one’s own part of the world for the first time. I am so impressed by their resilience and desire to make each moment of this program count. They are fearless in trying new things, which makes my job as a faculty leader much easier. At dinner, one of the students leaned over to me and whispered, “This has been the happiest day of my entire life,” and with that simple statement, a year’s worth of preparatory work was worth it. I think a message in the threshold mosaic of a home in Morgantina says it best – EYEXEI – “All is well.” Yes, truly, all is well. Mosaic floor from the House of the Doric Capital at Morgantina

I am an assistant professor of ancient Mediterranean art history and archaeology at SUNY New Paltz, and my research interests concentrate on the iconography of Greek vase-painting and the interrelations between Greek settlers and indigenous populations of pre-Roman Italy. I have presented my scholarship my research at international conferences throughout the United States, Europe, and the Near East as well as published my findings in various books and journals such as the Metropolitan Museum Journal. I received my PhD from NYU, where I participated in the excavations at the Sanctuary of the Great Gods at Samothrace, Greece for two seasons. Prior to my arrival at New Paltz, I taught at Hunter College and NYU.