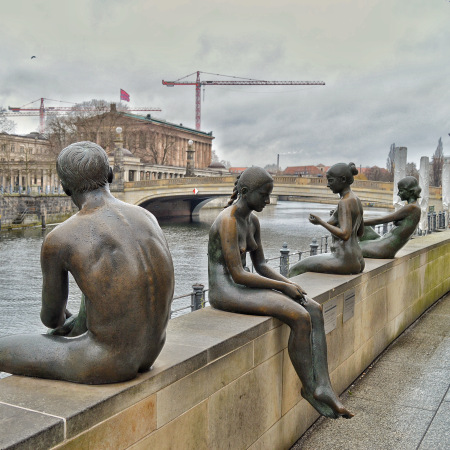 The Best of Berlin

Hello! It has been a long while since I have written last. I apologize for this, as school has picked up, the weather is getting nicer, and well.. I’ve simply abandoned my blog. But I am back! To share our experience in Berlin 🙂

To start, Berlin is my favorite city so far.. of course, this is difficult to say because every city is so unique and special in it’s own way. It sounds as though I’m preaching to a group of self-conscious teenagers. Anyways, Berlin was wonderful and Ema, Becca, and I each wished desperately that we could have stayed there with our wonderful AirBnb host, Madlen and her gorgeous Australian Shepard-Border Collie , Kappa. Kappa and Madlen were very likely a huge reason we loved Berlin so much. So, thank you Madlen and Kappa 🙂

We arrived in Berlin after a terrible Ryanair flight on Thursday night, got a train directly to Madlen’s house and were immediately greeted by Kappa (who sniffed us up and down and apparently decided he liked us), we then went right to bed so we could start our Friday fresh and ready to explore.

Each morning, Madlen made us a wonderful breakfast with an assortment of several spreads — for our artisan rolls, of course. Our favorite of these spreads was, by far, her mother’s homemade jam, which Madlen gave us an entire jar of to take home with us! 🙂 🙂

The below photo is of Becca on the train, which I took and shared because I really appreciated all the art throughout Berlin — including the fun prints on their metro.

Below is another photo of street art, which is all throughout Berlin — just another aspect that I loved.

Our day started out by walking upon Checkpoint Charlie, so we checked that out for a while. Another really great thing about Berlin (yes, there are so many great things about Berlin) is that their landmarks are free and open to the public. Of course, there are many museums, which we did not end up visiting because we have quickly discovered how draining museums can be, so we have decided to skip out on museums, unless there are ones that we must see. (This also saves a large sum of money)

Below, I am standing between a small part of the Berlin wall at Blackbox Kalter Krieg (it was an outdoor exhibit explaining Checkpoint Charlie).

After reading all about Checkpoint Charlie and watching several people pay to take photos with an army man in front of it, we moved on towards the Holocaust Memorial (Memorial to the Murdered Jews of Europe), which is something I have wanted to see since my German language teacher explained it to us last semester. What she said is correct, the memorial has an odd feeling to it.. you can get lost in it, because the deeper you go, the higher to cement slabs rise and the lower the ground dips. It is also disconcerting because children that are also visiting the memorial run through the alleyways shouting and laughing and you cannot see them until you round the corner of the next cement block, and by then, it’s too late.

Holocaust Memorial featuring Becca (to show the size of the structure).

We then walked out of the memorial, to the Großer Tiergarten, which also has many exhibits — if that’s what they can be referred to as. Berlin is filled with so much history, it hits you at every turn. Throughout the park there are monuments, sculptures, stone collections (Global Stone) — which you will see below.

This just looked so cozy to me, so I took a photo 🙂 (Above)

Below are Ema and Becca between two stones of the five stone groups. From our understanding of it, these different stones are from different countries in the world, they connect somehow with the sun during summer solstice, and they are meant to symbolize the unity of people all over the world. They are lovely rocks.

This is a photo of tree bark from a tree that we saw in the park. I don’t believe I’ve ever seen tree bark like this. It’s difficult to tell from the photo, but it is a beautiful woven pattern, so I had to take a picture. I’ll try to look up the type of tree and get back to you later on that. (Dad, do you know?)

After exiting the park, we came upon a Russian War Memorial (Russisches Ehrenmal Tiergarten). We really didn’t realize how much Russian influence there was in Berlin until seeing such memorials. There is another one that we happened upon in another park that is featured below. The above may sound like an ignorant statement, but until you are really there, you don’t realize it.

From that Russian memorial, we spotted the Brandenburg Tor, which Ema was itching to get to, as were we all. So, we headed over thataway and admired the wonderful structure, took some photos, walked down that stretch a bit, looking for food — of course. We settled for a second breakfast in Kaffeehaus Einstein because we were starving at that point. We regathered ourselves, ate a delicious meal, and headed on over to the Reichstag Building to wait in line for free tickets to see the above glass dome. Yes, free. The line was quite long and the time slots for the day were filling up quickly, so we were only able to snag tickets for a 7PM-ish visit. After getting our tickets, we decided to walk out along the Spree River to maybe find a cafe or warm place to settle for a while.

We found a quaint little cafe, got ourselves some wifi and espressos (it’s been a bumpy adjustment as a coffee-lover here, as the coffee market is very different from that of home — warning Mom and Erin 🙂 ) AND! The most exciting part about this cafe, other than their vegan scones, was that they sell Mast Brothers Chocolate!!! Becca and I were ecstatic as it was a little bit of Brooklyn in Berlin, plus we just love their chocolate. We did not buy any though, considering how expensive it is at home, it must’ve been out the roof there. Ha!

Anyways, around 6:30 we made our way back towards (I speak of Berlin as if everything is just around the corner or a block over — which it isn’t, Berlin is actually huge compared to the cities we’ve been in thus far) the Reichstag for our tour.

Below are photos from the rooftop terrace and the glass dome atop the Reichstag building. It was beautiful to see the Berlin skyline at night.. many photos were attempted, but none captured the essence, so we left it be.

The dome offered so must historical information as well and we were guided by an audio tour as we gradually walked to the winding top of the dome. The structure of the dome itself is also beautiful, as it is an open structure, allowing rainwater and such to enter through the center structure. This is meant to symbolize openness or transparancy in the German government, as you are able to see the parliament floor throughout the entire dome. In the photo below, you can see the purple seats of the parliament on the first floor reflecting in the mirrored pieces of the long center structure.

Above are Ema and Becca on the rooftop terrace of the Reichstag.

Below is a photo of the amazing meal that we had at Chipps — a delicious vegetarian restaurant. Featured below is bread dumplings, mushroom ragout, baked leaks, and cranberries. Becca and I also tried out different beers, which were also lovely!

On our walk home, we spotted the Berliner Dom at night.

Here is a photo of Ema with Kappa, who loved to come into our room to play with us when we arrived home at night. If you couldn’t already tell, we loved Kappa lots and he loved Ema’s pillow!

The next morning, we walked through the nearby park, Becca showed us another Russian War Memorial she had run upon, which we found out actually has buried soldiers beneath some sections.

Following this, we made our way to the East Side Gallery — or Berlin Wall. Below are some of the art pieces that I really loved.

Below is the Berliner Dom by day.

Becca and I in front of the derriere of the Dom across the Spree.

We found a street art market whilst walking around this area as well. After looking around, we decided to go see the Olympiastadion, which was at the outskirts of the city. There was a rowdy game going on once we arrived and you had to purchase tickets to gete in, so we observed from the outside and listened to the rising and falling noises of the crowd inside for a little while, then headed back to the center for an early dinner at a delicious Thai place, then headed home for the night.

The next morning, we caught a flight back and regrouped for Monday once back in Brussels.

None of us wanted to leave, as we all appreciated Berlin so much. I plan to return someday because I know that there is much more to the city than we were able to see in just one weekend!

Goodbye for now! It is a wonderfully sunny day out — such a rarity in Brussels– so I am off to run through a park! Hello! My name is Katie, I am an English major and double minor in Environmental Studies and Law and Politics. I am very excited to be living in Belgium with a host family for four months! I will be studying politics, law, and French whilst abroad and I hope to discover Europe and more about myself in the process!

Next ArticleSeeing the World and What Not