Today is Day 2 in España and I am loving it. We arrived yesterday just after noon at this lovely hotel in Granada, Spain. That was only after a very long trip via two airplanes. At JFK I found the rest of the group waiting at the gate for our plane to Madrid. We all introduced ourselves and everyone is super nice. We all had separate seats on the plane and reunited in Madrid where we waited another five hours before the next flight. Our second flight was on a much smaller plane. We boarded the small plan from stairs outside like celebrities and presidents do! Exciting right? I thought so. I used to have a fear of flying and the small plane was a little more rough so I was glad when our feet reached the solid ground in Granada. Luis and Miguel, our program directors, met us right when we arrived in the airport of Granada.

By the time we got to the hotel I was hardly awake. After a nice lunch we went to our rooms and snoooooooooozed. Then, after a total of only two hours of sleep throughout the trip, I couldn’t resist sleeping. They say you’re not supposed to nap in order to quickly adjust to the time difference but after a shower and then feeling my eyelids gain weight, yeah, I gave in. I forced myself to wake up at 6:30pm and take a walk to get cash and some fresh air. My roommate, Rachel, came with me and we explored a couple of blocks near the hotel. Walking outside of the hotel made us say “Hmmm, okay NOW we’re in Spain!”

After dinner with the group, everyone else wanted to take a walk also so we went on another outing and then returned for some real sleep. At 9:30am we boarded the bus for a tour of La Alhambra, the famous castle in the mountains of Granada. The castle was filled with beautiful Islamic artistry. My favorite spots were the most serene and peaceful. You could really imagine how easy it must have been to pray in peace. Los torres had fantastic views of Granada and its surrounding mountains. We saw the tallest mountain in all of Spain, covered in snow just like many of the others. My toes were frozen by the end of the tour, but it was worth seeing those beautiful sights.

The bus then took us to a mountainous part of Granada that had a gorgeous view of La Alhambra. This was probably my favorite part of the day because of the area itself. We were in a residential area filled with houses on a steep hillside. We saw and heard men playing flamenco on their guitars. The sun shone just right. The walk through the beautiful Arabic architecture was precious; really something unique that I can still smell and taste in my memory. I almost felt at home seeing people in their natural state. There were numerous people with dreadlocks which I thought was fantastic! It was like being back in the Lower East Side of Manhattan, or back in my childhood. I didn’t think I’d see that here. There were a lot of places to see Flamenco. (We didn’t see any Flamenco dancing but I can’t wait to see some in Sevilla!) There were also cute little shops on the way back into the main part of Granada. After a lunch and siesta, we took a tour of la catedral de Granada, then got some chocolate con churros.

There are two things you should know about today- one is that it was cold. Be prepared because I wasn’t. Granada is surrounded by snowy mountains unlike a lot of other Spanish cities. The second- chocolate con churros is a legitimate reason to visit Spain. When you ask for hot chocolate here, it’s nothing like American hot chocolate. It’s almost like hot chocolate pudding, plus you get churros to dip in it. Enough said.

Now that it is 1am I must sleep to be up and ready for Malaga tomorrow! I’ll share a quote before I go from the “Powerful Thoughts” book by Louise L. Hay. “I feel good about everyone I meet. All my relationships are healthy and nourishing.” 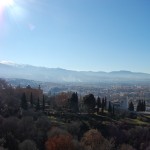 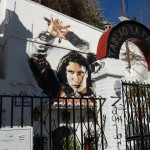 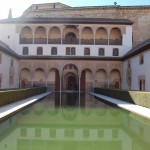 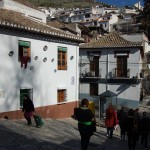