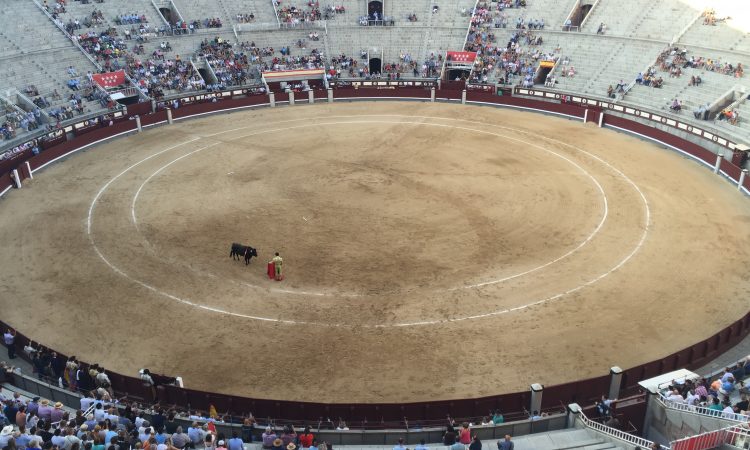 The very fact that this was my first opportunity to post here since I arrived in Spain exactly 3 weeks ago speaks volumes to the kind of hectic scene I flew into (and one that I was certainly not as prepared for as I should have been). Two of the most important things I’ve learned not to do while you are about to embark on your study abroad journey: 1. Don’t wait until the week before your flight date to figure out your housing accommodations. 2. Make sure you have access to Wifi when you arrive. In hind-sight these both should have been givens, but alas… maybe someone will learn from my mistakes.

Trials and tribulations aside, my limited time here in Madrid has truly been an amazing experience. The amount of friendships made from people all over the globe is a once in a lifetime experience and I know that it is only the beginning. The ESN (Erasmus Students Network) team here at UC3M provides the students with more than enough opportunities to meet other students studying abroad with a variety of trips, tours, parties, etc.

Despite the tardiness, my friend Nicolas (another fellow New Paltz student) and I are very happy with the apartment that we got. It isn’t the closest to our university or to the nightlife, but it is right next to the beautiful El Retiro Park, one of the staples of the city. The food in the neighborhood is also delicious and for the most part pretty cheap (at least compared to NYC).

Speaking of NYC, “the city that never sleeps” nickname might be even better suited for here. A theme I have noticed since being here is that these Spaniards like to do everything later. People eat lunch at around 3-5pm, dinner past 9pm, and the clubs are all open until 6am. Getting used to the time schedule here has been very difficult and I still haven’t quite got the hang of it.

Other than a few tours of the city and seeing some amazing art museums, I haven’t really done as much traveling or done as much sightseeing as I would like. One thing that I have done is witnessed my first bullfight last Sunday at the world renowned Plaza de Toros de Las Ventas. At first I enjoyed it; the atmosphere, the culture, the history, but then it really took me by surprise just how violent of a sport it is. After seeing the way that people in the U.S. reacted to the death of Harambe, I found it mesmerizing that every Sunday in this bullring they brutally kill 6 bulls in front of a huge raucous crowd. I’m not one to talk badly about another culture, but I can’t see this sport being around for much longer (I could be wrong though).

With classes well under way things are beginning to settle down a little bit for me over here, but a trip to Barcelona this weekend awaits and I couldn’t be more excited!

¡Feliz día de acción de gracias! Happy Thanksgiving everyone! This is my very first Thanksgiving not spent with my family–is this that growing up thing Peter Pan feared so much? Thanksgiving in Madrid is definitely no Thanksgiving in New York, but I’m not complaining either (we had our first dust of snow of the season this morning!). When I woke up this morning I yelled, “It’s Thanksgiving!” but quickly felt an emptiness. Spanish stores and food markets have skipped right past to Christmas decorations and treats, so to pay homage I made myself a savory turkey wrap for lunch :p I also put up a little holiday decoration once the leaves started to fall! When I returned to my room after a quick run to the supermarket, I found a really sweet surprise: a Ferrero Rocher gold, bow-topped box and a Kinder Sorpresa** sat neatly on my desk! My roommate, who was studying at her desk, had bought me the sweets as a Thanksgiving treat, knowing that I missed celebrating at home. Even though it was such a small, simple gift, I felt so happy. She also knew how much I wanted to try a Kinder Sorpresa before I left Spain. I gave my roommate a huge hug as she told me how she wanted to make the a little more special for me. My roommate gave me a fancy box filled with Ferrero Rocher. I also got to eat my very first Kinder Sorpresa…yum!!

Although I know of a few international students gathering for potlucks tonight, Thanksgiving generally isn’t celebrated here in Spain…for a rather obvious reason (it’s a celebration of pilgrims’ emigration from Britain to the United States.) The Spanish articles that I’ve read about the holiday are primarily about Black Friday, the ways Americans celebrate the holiday., and President Obama sparing a turkey named “Popcorn.” I wanted to watch the Macy’s Thanksgiving Day Parade online but I couldn’t find one working link…but I did watch some of the NBC news leading up to it.

I went out to Sol with a few close friends [Thanksgiving night] and noticed that a few bars were offering special Thanksgiving menus (pumpkin cream, turkey, cranberry sauce, etc.) I didn’t go to any of these said bars, but I had a really nice night with three of my closest friends here. I felt really happy–even though I wasn’t celebrating the holiday with my family in New York, I was celebrating my time here in Madrid with these friends who’ve made this place a new home. Earlier in the day I was able to Skype with my mother, who showed me her lovely dinner table arrangement, and I got to see my cute dogs as well.

Being away from home this semester has led me to feel thankful not only on Thanksgiving day, but the entirety of my semester abroad. When you’re away from the comforts of home and are pressed to do much more than you’re used to on your own, you learn how to appreciate those things you had so easy. I’m thankful for having such a loving family and caring friends, thankful for coming from a country that is relatively very open to change, thankful for being able to receive a quality education, thankful for being able to spend almost five months in a completely different country…and my list can go on and on.

As I said, Thanksgiving in Spain is no Thanksgiving in the United States, but I had a wonderful day reflecting on the marvelous things I’ve been blessed to give, receive, share and experience.

**Kinder Sorpresa, otherwise known as  Kinder Surprise chocolate eggs, is illegal in the United States due to safety reasons; each Kinder Sorpresa has a toy inside, but the chocolate itself is really delicious.