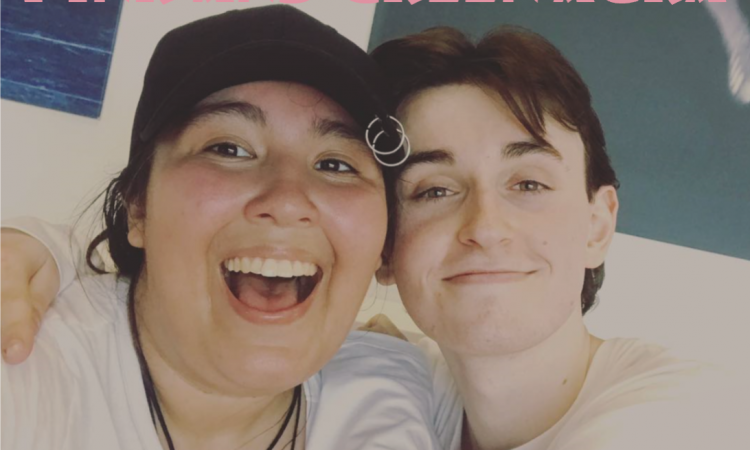 Ivon; His name is Ivon Roberts. Since the day I had an actual conversation with him, we’ve hung out like three times but it was like there was some instant connection there. Funny thing is, there was already an obvious connection between us that I actively ignored for like 3 months because I was stuck in such a negative mindset.

If you’ve read all of these blogs or know me, you know I have an obsession with all things Korean. I even think I might have been a Korean Princess in a past life, but that’s beside the point. The point is that ever since I arrived here in Limerick, I had been praying to meet and chill with someone who shares my interest in the Asian Gods and Goddesses that make up the Korean entertainment industry. And yet, when I found out there were TWO people that shared this interest in MY DAMN CLASS, my negative mindset caused me to ignore the fact. I decided not to engage in too much conversation because I thought, “eh. They won’t like me because I’m American”, or “eh. They seem too popular to hang out with me… I’m a loser”.

Man, I sincerely wish I could go back in time and knock some damn sense into my naive self. I missed out on an amazing friendship for almost 5 months. But you know what, it does bring me joy that I ended up finding this friendship. Honestly, its one of the only things I’ll miss when I leave Ireland.

But why, though? Can thou explain?

I can. After talking to Ivon for a while, we’d decided to hit up the stables for the last couple “TGIF International Parties” they were having. Now, if you’ve read my other blogs, you are aware how much I despise the music they play. Yet, I really felt like this time would be different and BOY WAS IT. First off, I was actually happy the entire night. Four different guys actually came to talk to me because I guess they found me interesting. Whatever the case, Mama felt sexy as hell. I felt such a natural high just from being there with my newly made friend. That child is like a monster on the dancefloor; he will legitimately dance to anything and throw all of his energy into it. Needless to say, just by being around him for one song made me feel like I’d just had 17 shots of tequila. So the music wasn’t a bother; I started jamming to Party in the USA feeling like a proud Lil’ ditsy American. I went around and must’ve given 10 different strangers hugs just because I found them attractive. Mama was wild.

I had never felt so free in the 5 months that I’d been in Ireland so this was an actual big deal. I just felt so confident and I honestly think part of it came from the energy I was picking up from Ivon. He danced the entire night without a care in the world. He was just happy to be doing something that was fun for him and that alone was a joy to watch unfold. The next time we hit up stables again, it was just as magical and I am so glad. Now when I think about the on-campus club/bar, I am filled with joy, happiness, and laughter.

The third time we hung out, we went to go eat. We must’ve stayed in the restaurant for like 3 hours just talking about life and other things. I truly felt connected to someone Irish for the first time since I’d been here. I hadn’t had a talk like that with anyone in a really long time. I also hadn’t laughed that hard in a really long time and it felt amazing. Then we hopped in his car, and I listened to his album. Yeah, ya heard right. IVON IS A SINGER-SONGWRITER!!

If you know me, I am obsessed with music and love humans who create it. You can imagine my utter shock when I heard how professional all the songs on his album were. I was expecting like normal-grade college kid produced stuff. But boy, his stuff sounded like he’d spent years in a studio perfecting it all. The lyrics were also freaking spectacular. I related to almost every song and part of me wanted to use half of them and create a musical about the struggles my generation goes through. I was beyond amazed and like I- I just- speechless.

But I think the best part of that night was what he did and where he drove as I listened to all these fantastical songs. Ivon drove us to like two or three different counties as we heard his songs. He said he’d done it so now I can say I’ve explored more of Ireland and been to more parts of Ireland. The smol sensitive crybaby in me wanted to weep with gratitude. Nobody has ever done something like that for me and it literally warmed my heart.

When we got back in the area where the school was, I popped in some KPOP and boy am I glad I did. THIS IS PRICELESS!

When I got home, I felt so happy, grateful, joyous, and basically any other positive emotion you can think of. The boy with the pink and green aura had given me the gift of pure happiness, a thing which I’d forgotten the feeling of.

Thank you Ivon Alexander Roberts. You mean the world. Keep chasing your dreams and never doubt yourself, you will do great things for this world.

Stay tuned for next week’s chapter of

“The Land of Ice Chronicles”