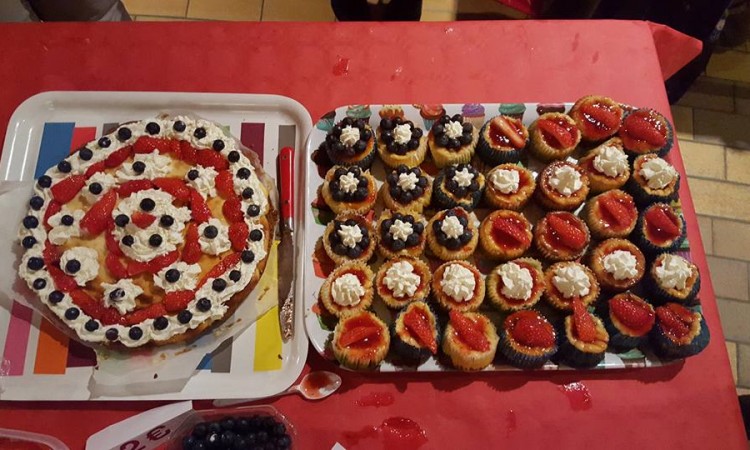 The Real Definition of Melting Pot

Besançon is a melting pot. It’s a very eclectic little city, but despite its small size and the fact that most people have never heard of it when you ask them, there are thousands of people living here from all over the world: Thailand, Syria, Belorussia, Iran, Japan, China, the Republic of the Philippines, Indonesia, Italy, Senegal; the list goes on and on.

The Merriam-Webster dictionary defines melting pot as “a place where different types of people live together and gradually create a community.” If you ask me, that describes Besançon pretty well. Especially after the Tour Du Monde en 80 Plats (Around the World in 80 Plates – yes, a clear play on words of Around the World in 80 Days), where I feel the definition is present both literally and metaphorically speaking.

The Tour Du Monde, in something like its 20th year running, was held this past Tuesday and Wednesday, March 29 and 30. This event, to put it simply, pretty much exemplified everything that Besançon is and has to offer: the different people, the different food and all of the different culture blended into one event over the course of two days.

Everyone from their individual countries got together to cook and bake traditional homemade cuisine. Our American team made barbecue pulled chicken, corn bread, coleslaw and cheesy potatoes (thanks to Griffin, Jesse, Katherine and Kyle) as well as banana bread (thanks to Genesis) and cheesecake (thanks to yours truly, Tori, Kate, Laura and Hespera). Last Monday was the day we started baking. Tori and I woke up early to go food shopping, and from there on we were all making cheesecake from dawn until dusk: 11 a.m. to 12 a.m. Twelve hours and nearly 30 containers of Philadelphia cream cheese later, we were all completely drained, covered in Speculoos crumbs and cheesecake batter, with 170 mini cheesecakes and three big cheesecakes cooling outside my apartment.

I woke up Tuesday morning feeling some sort of hungover. I had drained all the life out of myself. I relaxed all day until I knew friends were coming by to help me carry the cheesecakes around the block (it’s a good and convenient thing I live where I do) – I also knew the long night we all had ahead of ourselves.

I walked into the Grand Kursaal where the event was being held: a big theater filled now with tables and chairs for the people who would be coming to eat all different varieties of food. Everyone was setting up at their individual tables. Chinese lanterns hung next to our big American flag. The room was rushed and buzzing. I honestly don’t know if I’ve ever felt such a lively, enthusiastic energy in a room before. Everyone was excited to tell their guests about their food, their culture and themselves. As Americans, it was sometimes easy for us to understand why the guests chose other tables over ours at first. People knew more about the United States than most other countries at the Tour Du Monde. But when people came over to us and actually took the time, they realized we were more than just burgers and fries. Our servings started to dwindle. Our cheesecake even sold out on the first night (so yes, we did have to make more the next day… 15 more containers of Philadelphia, 131 mini cheesecakes and three more cakes later…).

Being as this event was run by the social/cultural activities coordinators from the CLA (our university), a lot of our friends from class were there. And that’s another cool thing about living in Besançon and going to school at the CLA: you meet so many new, interesting and diverse people here from all over the world. Our friends from South Korea introduced us to chicken marinated with garlic and other spices, ketchup and a sauce called “gochujang” (“닭강정” in Korean, pronounced “dakgangjeong”) along with a traditional honey cookie called “yakgwa.” Our friends from China made homemade spring rolls (“nems” in French, “春卷” in Chinese, pronounced “chun juan”), rice with shrimp and vegetables, spicy tofu (ma po tofu), and a dessert called “perles de coco” (the French translation, “nuomici” in Chinese) a glutinous rice dumpling filled with a sweet red bean paste and coated with coconut. I tried homemade sushi made by my friend Mayuko. I also walked around and tried food from the Philippines and Syria (it turns out Syrian food is incredible; would recommend). Most of all it was just super cool and inspiring to be able to (and to have to, for that matter) communicate with everyone in French. It was so interesting and enlightening to be surrounded by people whose only common language was French (though some people would throw us Americans a “hello” or a “thank you” every now and again). And naturally, when you’re standing next to a bunch of people in a crowded room for hours, legs hurting and feet sore from standing too long, you need to find things to distract yourself. You start talking to people – maybe in French like all of us. You start to learn more about them and their culture. You learn why they came to France in the first place, what they’re looking to accomplish here, when they’re going home, which meal they made for their stand, which meal they liked from yours. Not to mention everyone complimented our cheesecake. That was enough to put me on Cloud 9. Everything about the Tour Du Monde was fun. I just felt giddy. (left to right) Mayuko (who bought our cheesecake!), me, Kate.

Not only was there food but there was entertainment too, or “les spectacles.” We watched our friends from Japan and Indonesia perform their cultures’ traditional dances. The music and the movements were so catchy we caught ourselves dancing and vibing along while we watched them. Riley performed a traditional Irish step dance and Griffin played a couple songs on the guitar to represent the United States.

At the end of Wednesday’s night, as the night was coming to a close, everyone got up on stage as Vincent, the coordinator acknowledged each of the countries that participated. They played a couple songs that we all danced to on stage, ending with Psy’s “Gangnam Style (강남스타일)” (it was super cool to see people, a couple of my friends among them, who actually understood the lyrics and could legitimately sing along to them).

But like I said, the Tour Du Monde was probably my best/favorite experience while being abroad yet. Being able to talk to people, laugh with them, learn about them, and teach them some stuff about yourself and your culture, all while speaking French, has just been so gratifying. It makes knowing I have to leave this city and all these people in about two months that much harder and that much sadder. And with a two-week spring break approaching at a rapid speed (it’s already next week, woohoo!!) it’ll all be going by that much quicker. I’ll just have to try to make the most of it and make it last for as long as I possibly can.

Thanks to all my American friends who helped bake with me, who cooked and baked all of our other food, set up our decorations and who have become like a little extension of my family. Thanks to all the other friends I have made while I’ve been here – y’all know who you are, and I have learned so much from all of you. These are truly experiences I will never forget.