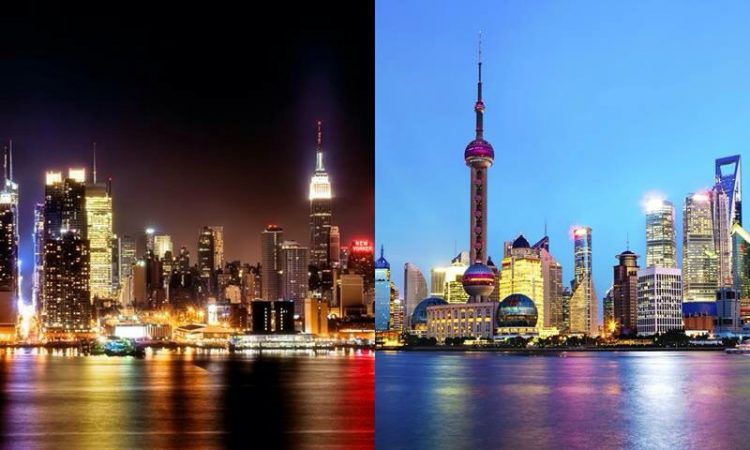 As I’m writing this blog, I will be leaving to the airport in a few hours.
I would like to officially announce that I will be studying abroad in China this summer at the Shanghai University of Finance and Economics (SUFE). I’m so grateful for this opportunity to study abroad in China. Hopefully throughout the academic courses and the trip, I will gain experience in the business field as well as personal growth in adapting new environment and being independent.

I’m an introvert and like to stay in my comfort zone. It’s definitely hard to leave my home, friends and family. I try to tell myself that I’m only gone for one month. Yes, it’s not a big deal – it’s an opportunity. The thing that hits me so hard is time. I have been busy working since the finals were over. Along with that, I’m trying to keep up with my biology online course. I haven’t had time to enjoy the time left in America before I leave. Until the time comes so close that I realize I have to go and I will miss this place. The longer you stay in a place or spend time with a person, you develop a sentimental feeling for it. What I get from this whole process of preparing and going to study abroad is organize your time well for everything, emotionally and physically. Overall, take your time and enjoy every moment, don’t rush through the process as you will realize that everything is okay. There is a beauty in every trouble, as long as you see the other bright side of it.

Here are some pictures I put together between Shanghai and New York City. There’s no mean to compare two places but I just want to put them out there as a reminder of the places I’ve been to and experienced. Source: Photos are from Google Images.

Stay tuned for my next blogs as I will walk you through my journey in China.

There are only a few days left before I’m in Beijing, China. It hasn’t set in that I’ll be arriving so soon.

I’m really excited about the company I’m working for. I mentioned E-Go to my coworker that used to live in China and she knows about the company. This is especially surprising because she lived in a completely different part of China. The projects on their website look amazing. I’m definitely going to learn a lot about graphic design that I would of learned in school. The company I’m working for seems excited, too. My study abroad adviser met with them recently and told me how much they are looking forward to meeting me. During the Skype interview, my interviewer seemed really excited to show me around.

My goal is to bring the smallest suitcase possible. This is a problem because I like clothes a lot. I’ve gotten somewhat used to this by taking the bus home from college during holidays, but in these situations there are already some clothes waiting for me at home. I’m going to wearing a lot of black because it matches everything.

I’m really looking forward to being in China and hopefully my very shy/quiet self will somewhat decrease the stereotype that Americans are loud.

Conversion on the Brain I think I’ve finally got to the point where I know how to use China’s currency, either that or I’ve become a super cheapskate.

Probably for the first month I’ve been in China, everything I bought, I had to convert in my head to see if it was a good deal. But I realized…as a American everything seemed to be an amazing deal, even if it was 游客价(tourist price). I didn’t get those prices as the rest of my classmates because I look Chinese and spoke with better fluency but my A.B.C. speak always seemed to pop out at the worse times….like right when I’m about it haggle TT ^ TT….

Like a big fruit cup(not like Starbuck’s teeny tiny cups) by Shida’s North Gate（师大的北门） is only 3 RMB which is an equivalent to less that 50 cents USD…That’s actually considered kind of pricey for portion and types of fruit…but then again all fruit cupsare kinda overpriced. *coughcough* SUB *coughcough* Though I do admit I still convert when something is over 100 RMB (~16USD) but I try not to buy anything over that because I can make 30-50 RMB(5-8 USD)last a day…maybe even two if I am lazy and just eat the 1 RMB pork buns DX so yummy.

I mean seriously since I am staying in the Shida （师大） dorm rooms there is no kitchen and I am not buying a mini-fridge because that would jack up my electric bill （oh yeah you gotta watch your electricity）but even so the C.L.I. (Chinese Language Institute) does have a fridge and kitchen…but it’s kind of “far”(college student far) and I’m lazy. I am thankful I got the money transitioning down but now I really need to work on not being conned into paying too much and stop spending so much in the Drink shops（饮料店). Especially coffee X-X…..and cat cafes…..and bars.
By the way…? they sell alcohol on Campus o-o

This is a super late entry but….
I arrived in Asia on 17th of Aug. to Hong Kong first at a family’s place

Then left for HK and China early to vacation with my parents, two uncles, and one auntie. We stayed at our family’s house in Hong Kong to get over our jetlag because we were to go one two tours, a 7-day-6-night tour of Shanghai and cities around it and a 6-day-5-night tour of Guilin, before my semester started…you know to at least get a taste of where I’m going before I start classes. Unfortunately these tours were not a good experience because of our “shopping stops.”

Granted our family did see some amazing sites as well as take awesome photos, but these tours are said to be sponsored by the Chinese Government because they are so cheap. But in reality they are also sponsored by private companies that own these Shopping Stops, so it is required for us to go on them.
The worst shopping stop would the last day at a jewelry store and probably be the worst experience on both tours. You would start by having your group led into a conference room and and told the person explaining the tour was “new” at explaining the product. Then the same person would talk you up to a friendly state and then lead you to a VIP room. In the VIP room he/she would show off a few extremely expensive products and then say…”Since we are friends I will give you something good for free.”
(In Shanghai, we got a jade pendant and in Guilin we recieved a small “sapphire”. I knew they weren’t real because when I bit into both of them my tooth left a white indent… )
Then they try to prove the authenticity of the jewel and then convince you to buy another thing of jewelry for a “special price.” Idiots…

Watch out for those tours guys.

My Dog ate my Visa…

Because I’m leaving the U.S.A. a lot earlier than my other classmates C.L.I., The Chinese Learning Institute, like the wonderful people that they are Fedex-ed my visa documents overnight with an attached application guide so I could go to the Chinese Embassy as soon as possible.
They did not foresee that the Fedex delivery man was afraid of my 9 month old puppy….Ok I’ve give the mailman pity points because my pup is 65 pounds
but C’MON MY VISA!!!!

DOGGY RIPPED UP MY DOCUMENTS

Unfortunately I didn’t even find out about it until 3 days later when I can back from New Paltz. So I’m sure you can understand when my 65 lb terror was terrified of me. I called C.L.I. right away and told me that the documents couldn’t be saved because there were the official ones and I should just get a long tourist visa. I was distraught and really I didn’t know what to do without my student visa so 3 days later I chanced it. The documents looks kinda salvageable…sure there were bite marks and the corners were COMPLETELY torn off . I filled out a tourist visa like C.L.I. said but I made copies of the original documents, got copies from Christian Wilwohl, my study abroad adviser, and also filled out my student visa…with an apology letter written in English and Chinese attached…

AND MY STUDENT VISA CLEARED ;D NOTE: I ended up tearing the head off the Fedex guy over the phone for throwing a package into a yard had a ‘BEWARE OF DOG’ sign…no regrets.