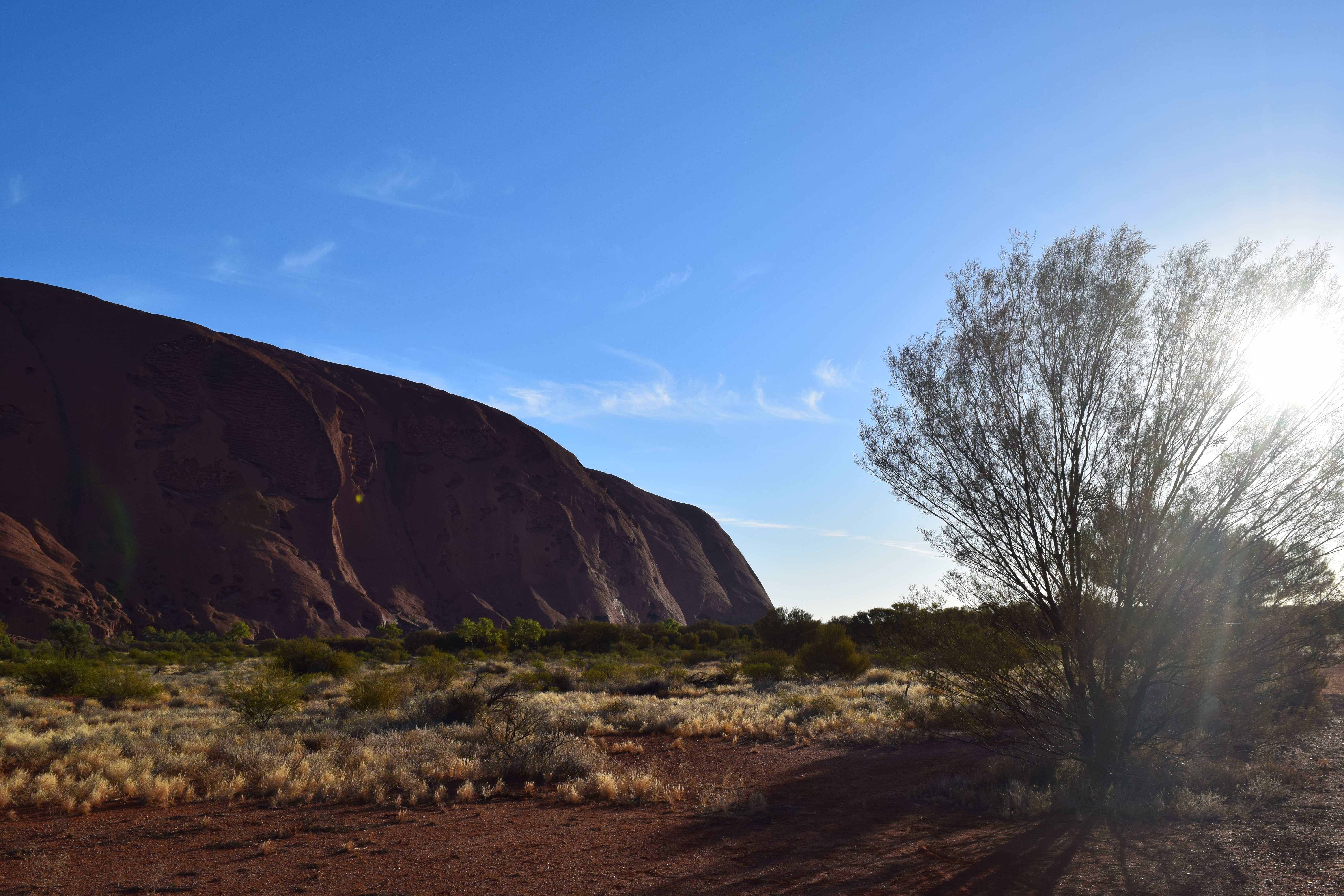 24 Hours in the Outback

Imagine the average bar of soap, with an area of roughly 46.2 cm (I did a lot of math to illustrate this). Convert that to meters, then multiply that by 187,826 or so, and you’ve got 8,460 m. In kilometers, this is an area of 8.46 km. Paint it red, put it in the barren desert, claim it as an Aboriginal holy land, and you’ve pretty much got Uluru. A giant oasis in the desert, this is the perfect chance for the government (and occasionally locals) to make money from tourists, who come daily in the hundreds and violate nearly every sacred rule set in place. It’s hot, full of flies, and there is NOTHING else around. So, is it really that appealing?

I didn’t actually know if I’d be able to make it to Uluru (also known as Ayer’s Rock) up until a week before I did. Getting a text in the middle of class from Lily and Julia, they tell me they found tickets to Uluru for only $200 roundtrip. The catch? It was only five days away, and I didn’t know if skipping class with such short notice was a good idea. I realized though, that opportunities like this don’t come every day, and if I didn’t go I’d definitely regret it. I would get to go camel riding in the Outback, as I’d promised close friends from my church, and get to see this giant rock that just screams Australia as much, if not more, than Sydney Opera House. So in a wonderful spirit of “screw class, I’m in Oz,” me, Julia, Lily, and Joseph, made plans to travel to what the Aussies call “the Back of Bourke,” i.e., “the middle of rural nowhere.”

Stepping out of the airport, you immediately get hit with an immense heat, and the first thing you notice is the redness of the soil beneath your feet. It’s truly Martian when you first see it, and it’s near impossible to get off your shoes or bare feet. The next thing that hits you is the flies, which will not leave you alone no matter how much bug spray you use or if you were dumb enough to buy a goofy looking fly net (no offense Joseph and Lily). Since it’s impossible to get anywhere without a car, renting one was on our first list of priorities. With that, we went into what somehow classifies as a town for lunch, and after that, to the rock. There really is no way to prepare for seeing Uluru in person. At a quick glance, it is just a big red boulder in the middle of nowhere. But once you see it even from a distance, it is truly awe inspiring. It’s much bigger than any picture can properly portray, and as you driver closer and closer toward it it becomes more and more magnificent. There’s also surprisingly more vegetation than you would expect: vibrant bushes, small trees, and loads of yellow grass.

Our first stop at the rock was at an Aboriginal Cultural Centre, dedicated to showing Aboriginal life, belief, stories, and most beautifully, art. Unfortunately, you aren’t allowed to take pictures of most of it, which while sad for the photographer I’ve become, is understandable. To have your way of life constantly intruded upon, even mocked, whilst trying to hold onto your identity amongst invasion of your sacred land, is a struggle I’ll never fully comprehend. If it means no pictures, so be it. This was my first hands on glance at a life completely foreign to me, dating back over 80,000 years. With more time, I would have loved to have seen more, but the schedule didn’t allow. And so we left there to embark on a bush walk around the rock itself, and as we pull up to the parking lot we spot a massive tour group climbing on said sacred rock. I want to punch every single one of them. If there’s one thing you don’t do on someone else’s holy land, it’s climb all over it, in doing so disrespecting everything about the owner’s beliefs, and claim it as your own victory. Don’t get me wrong, I want to take pictures, and I want to climb. But I was raised to respect other people’s wishes and their beliefs. To ignore that makes you seem not like a conquering adventurer scaling the top of the world, but an ignorant prick who really doesn’t care at all that this is someone else’s sacred land.

But, leaving them be and secretly hoping karma will teach them a lesson while I’m on the other side of the rock, the four of us begin the long walk around the base. As I’d mentioned earlier, Uluru is huge. With a circumference of 9.4 km (5.8 mi), it’s bigger than Central Park, Hudson NY, or even my pleasant Footscray suburb. Everywhere there is something to see, each crack and crevasse a work of art and each outlying boulder beautifully placed. The sounds of the occasional breeze, buzzing insects, screeching hawks filling your ears, and the soft red sand beneath your bare feet (I had to know what it felt like without shoes). Nevertheless, we gravely underestimate how long this walk will take us. Surely, we’re just going to do a quick loop. After an hour, we begin to question how long the walk is. Debating whether we should turn back or not to make sure we have time to see the sunset, we decide to keep trekking, sure we’re more than halfway there. An hour and a half pass by, and we’re pretty sure we’re not far from the end. Just short of two hours in, we’re getting close, maybe. At two and half hours, we have to turn to look at the map. Only then do we realize that this is a FOUR HOUR hike. Much too late to turn back, we have to tough it out for another hour and a half.

In the great desert heat, having to refill on water many times, and constantly swipe away flies, we make it to the car exhausted. Determined to carry on to see the sunset from a vantage point a few kilos away, we drive and arrive having just missed the best part of the sunset. The flies are still insane, and the light isn’t good enough for pictures. But something greater is out there than a colorful rock. Driving to the hotel we begin to see the stars emerge in the Outback sky. First, one. Then two, or three. We check in, have dinner, and decide to head out again for some quick stargazing. I look up at the immensity of the heavens. In the Outback, there’s absolutely no light pollution. You can see everything, stars all around and light filling the night sky. The entire galaxy is before you, a sight impossible to capture with my camera (but I got some from a pro photographer) but instead enveloping your entire soul. This is the opening of the heavens. And there is nothing more beautiful than this.

The stars came into vision again very quickly: having slept only 5 or 6 hours, we had to wake up early in order to prepare for our sunrise camel ride. Stepping outside to wait for our pickup, the frigid morning air chills you with ease. Arriving at the camel farm, the staff give us a quick run down on what to expect, and then take us out to the camels themselves. Having ridden horses several times, I can tell you riding a camel is a whole different rodeo. To start, camels are much bigger than most horses, and must be mounted as the camel kneels, as opposed to climbing up into a stirrup. Once saddled the camel rises to the ground using its back legs first: failure to observe and prepare for this leaves one with a face full of red dirt. Camels also walk using one side of their legs at a time, going left, then right, then left, much like a ship. As with horses, naturally you want a camel that is well behaved, and even more so since an angry camel has the tendency to spit. When asked about our camel, Luci, we were told that he is “adventurous” and “strongminded.” Only once up and on our walk did they reveal his full name.

And so, Joseph and I are ridding Lucifer the Camel through the bush as the sun just comes up over the horizon. The stars slowly fade as warmth returns to the Outback. Lucifer is actually quite well behaved, making me think he’s just misunderstood and teased by the other camels. We get to Uluru once again, as the sun rises over the vast Australian bush and paints the rock in these beautiful reds and oranges. I’ve said this many times before, but the view is breathtaking in every way, and the whole experience blows you away. Never before would I have thought I’d make it to Australia, let alone riding camels in the open Outback. I’m currently doing something I doubt more than 3 other people I meet will have ever done (Joseph, Lily, and Julia). I get to witness something here completely beyond myself. The beauty of this sacred rock, having in a peaceful and respectful way conquered it by walking the entire circumference of it. The vastness of this great galaxy, each and every star and planet before me. The pleasure of sitting a top one hell of a camel (pun intended) while riding through the desert.

I cannot overstate how special it really is for me to be here, not just in this country, but this world, this life. There is so much to explore out there. A rock. A desert. A country. A galaxy. And it’s yours. Next ArticleNot(ting) A Chance In Hill I'm Leaving