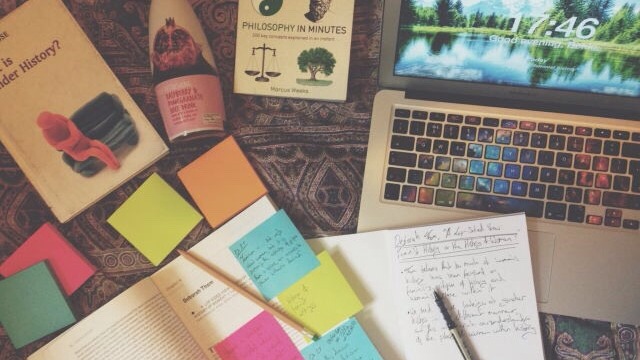 When I walked into class my first day here at Kingston University I wasn’t really sure what to expect. There are a lot of educational differences between England and America, almost all of which took a few weeks to get used to. The contrast in our school environments have various pros and cons, and it really depends on one’s major to determine if there are more cons than pros and vice versa.

One of the first differences I learned was that no one is referred to as “professor” here, they’re a teacher or lecturer. Most of them aren’t addressed the way you would address a high school teacher either – many go by their first name. It’s a very informal environment, however it made the whole experience less intimidating. Back at New Paltz, I see a lot of familiar faces in my classes. Creative Writing isn’t the most popular major, therefore every semester when I walk into class on the first day there is a 99% chance I know at least one person sitting in the room. It’s been that way for me since fall of sophomore year, so coming here and not knowing anyone in my classes was a bit odd, especially since all the people in the class were already acquainted with each other from the semester before. It was sheer luck that my first class had another study abroad student in it, who ended up being in two of my other classes.

Almost all of the classes offered here are full year classes rather than semesterly. Since the classes began in the fall, it was a bit difficult playing catch up so I could understand what was being talked about in class. Thankfully, all of my teachers were very understanding. They told me the basics of what they had already discussed to alleviate some stress and gave me a better understanding of references made to the previous semester during class discussions. I also only had to do half the work that went towards the final grade since I physically wasn’t present the first half of the year, which was a huge pro.

Not everything is so simple though. I’ve learned that many classes here are only once a week, but English majors tend to have class twice a week. I didn’t think this was weird per say, it’s the equivalent to how English classes at New Paltz are primarily four credit classes whereas classes for other majors are only three. What was weird about this is that I had two different teachers for the same class. I’d walk in on Monday to Matthew, and walk in Friday to Fred for the same class. I wouldn’t necessarily say this is a bad thing, but it did leave me to think I walked into the wrong classroom. This also made it confusing when I had a question to ask for an assignment. Which one do I email? Does it matter? Should I email both of them and see who responds first? Then when I did send an email, there was the anxiety of awaiting an answer. Should I have mentioned I wasn’t sure who to ask? Maybe I should’ve just asked someone in the class instead? It didn’t help that teachers here are not as quick to answer their email as New Paltz professors are. I understand that some professors are better at responding in a timely fashion than others, but like, imagine a professor you’ve emailed in the past and didn’t get a response for days, possibly not until right before the assignment was due. Apply that to pretty much every single teacher here no matter what your major is. I will admit there were a few lovely teachers who would respond in a timely fashion, though. Shoutout to Elly and Sarah!

Another thing is their citation format. Who the heck has every heard of MHRA? What happened to MLA, APA, Chicago? Were these just American things? Thankfully a few of my classes allowed myself and other abroad students cite in whatever format we used back home. Unfortunately, one of my classes required MHRA, a format I had never heard of and had to learn quickly if I wanted a good grade on my paper. The internet really is a beautiful place and I immediately found a bunch of style guides on how to use it. I’m not sure why I thought MLA and APA were universal formats, but just an FYI, they’re not. So be prepared to learn a new citation format in case your teachers don’t allow you to use what we’ve been learning since 8th grade.

Ultimately, there are about 10 pros for every little con. Just because things are very different doesn’t mean they’re necessarily bad!