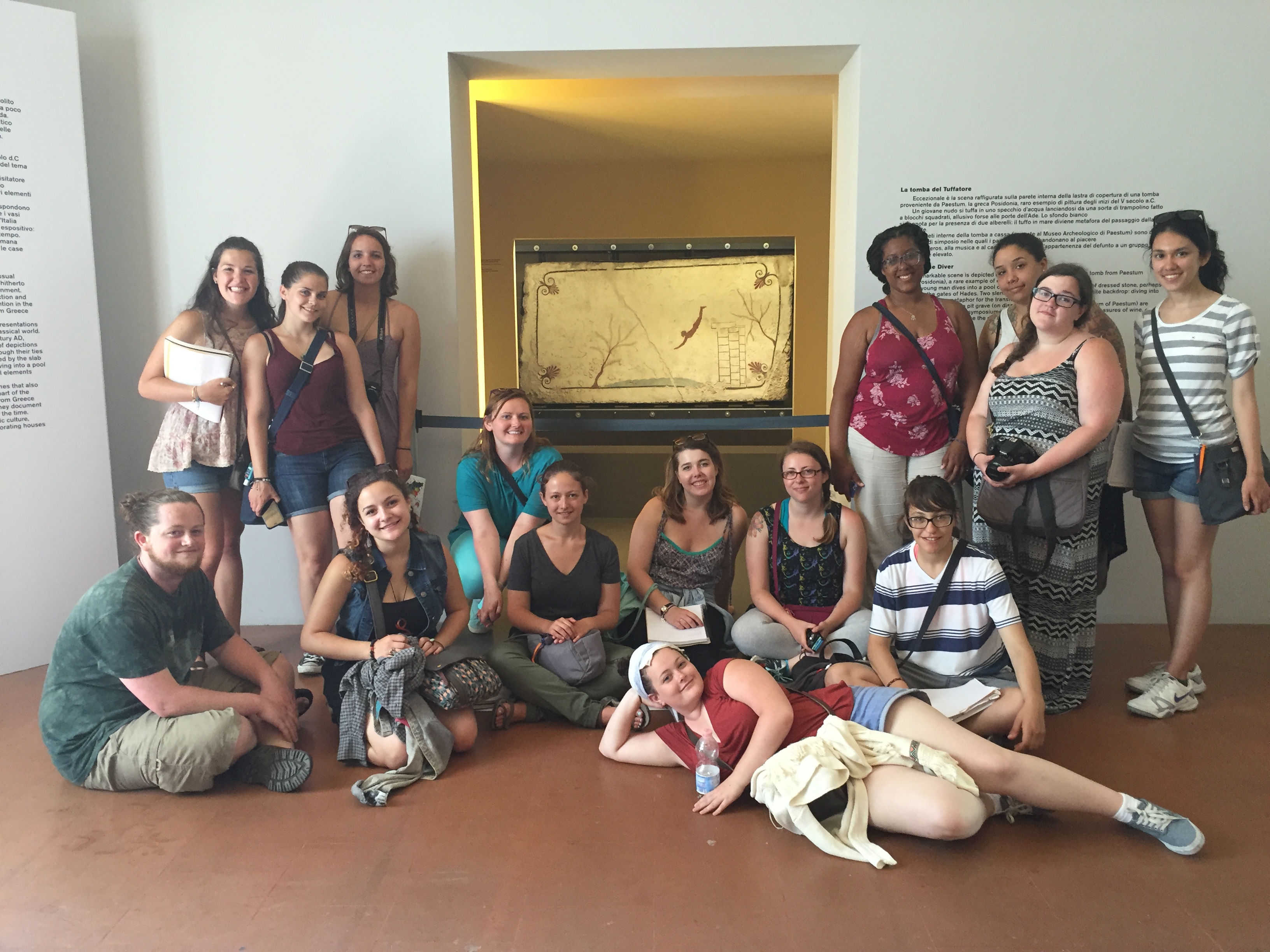 O sole mio: pizza and the past in Naples

Between nerves from being on a ship overnight and a broken-down air conditioning system on our deck, most of our group did not get a lot of sleep. We docked in Naples very early this morning (5:30 AM!) and hauling our luggage was exhausting, but the warm greeting we received at our hotel, even down to a welcome sign, made us feel right at home. To wake everyone up, we took everyone to Scaturchio, a famous Neapolitan bakery in the heart of the old city, for traditional local pastries and plenty of espressos and cappuccinos. Greetings from our hotel in Naples

Naples’ name comes from “Neapolis” or “new city,” which is what the Greeks called the new settlement they founded near the earlier nearby colony of Partenope. In fact, the coastlines of Italy from the Bay of Naples southward were so peppered with Greek colonies that the region was known as Magna Graecia or “Great Greece” in antiquity. Like many of these cities, Naples was laid out in a grid plan that is still easily recognizable in the modern road network of the historic center, particularly the three main east-west thoroughfares. Even parts of the ancient walls have been uncovered in different areas. One of Naples’ greatest treasures is its extraordinary archaeological museum, which is home to the finds from the Roman towns and villas buried by eruption of Mount Vesuvius in 79 A.D. and other ancient treasures found in southern Italy. We toured the museum’s highlights, including the infamous “secret cabinet” of material once considered too racy to be available to the public, which gave us all a good chuckle or two. Giggles in the “Secret Cabinet”

We saw incredible mosaics from homes in Pompeii such as the Alexander Mosaic from the House of the Faun, likely a copy of a Hellenistic Greek painting of Alexander the Great fighting against the Persian king Darius at the Battle of Issus. The students also got their first exposure to Roman wall painting, which decorated both domestic and public spaces. The famous Alexander Mosaic from the House of the Faun in Pompeii, now in the National Archaeological Museum in Naples Ancient Roman wall painting of the riot in the Pompeii amphitheater in 59 A.D.

We admired massive sculptures uncovered in the remains of the Baths of Constantine in Rome, many of which are Roman copies of ancient Greek originals, as well as a special exhibition on depictions of nature in Greco-Roman art, which featured many pieces in the museum’s collections that are rarely on display, including one of my favorite Athenian vases depicting the siege of Troy, and the cover slab from the Tomb of Diver, on loan from the archaeological museum in Paestum. Roman sculpture from the Baths of Constantine in Rome

After our lunch break, during which many of us indulged in Naples’ famous pizza, we went back into the city’s past by taking a tour of underground Naples. The modern city rests many feet above the original street level The Greeks built their new city from the bedrock beneath their feet, creating a system of man-made caves that were converted into cisterns, supplying the population with a constant supply of water. Over time, these cisterns fell into disrepair, were filled with garbage, and generally forgotten until World War II when Neapolitans needed to build bomb shelters to protect themselves. The start of the Naples Underground tour – more than 100 feet under the modern street level!

The cisterns were reopened, becoming home to thousands of people, and today they are visited by tourists to experience Naples’ 2500 years of history. The tour was a fun candlelit adventure, but definitely not for the claustrophobic because of some of the narrow tunnels at times. Exploring Naples’ past by candlelight

Due to threats of thunderstorms tomorrow, we have changed our plans a bit to stay closer to home by going to Cumae rather than going to Pompeii and Herculaneum. This meant a last-minute dash for me this evening before all of the stores closed to find picnic supplies for everyone’s lunch tomorrow. Bless the deli down the street from our hotel – they really came to my rescue!

I am an assistant professor of ancient Mediterranean art history and archaeology at SUNY New Paltz, and my research interests concentrate on the iconography of Greek vase-painting and the interrelations between Greek settlers and indigenous populations of pre-Roman Italy. I have presented my scholarship my research at international conferences throughout the United States, Europe, and the Near East as well as published my findings in various books and journals such as the Metropolitan Museum Journal. I received my PhD from NYU, where I participated in the excavations at the Sanctuary of the Great Gods at Samothrace, Greece for two seasons. Prior to my arrival at New Paltz, I taught at Hunter College and NYU.