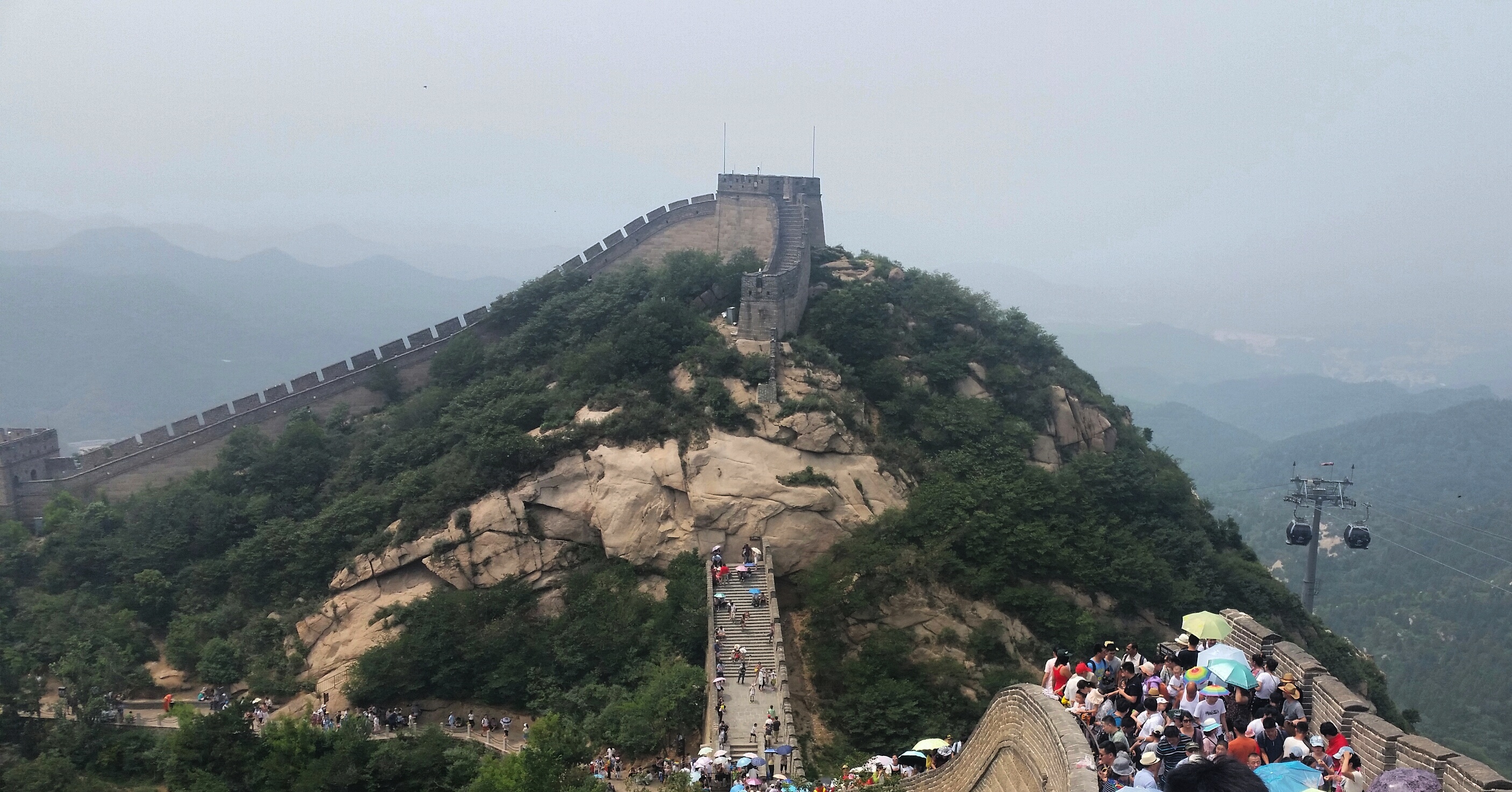 Some Cool (and Some Slightly Less Cool) Places

The Great Wall: I feel like you already know enough about this one. I only managed to get to the tourist part, which I regret a little, but it was still great. It was very crowded. While at the top of this part, I could see other much emptier areas. If you can find a way to get to safely get to an emptier section, definitely do this. Also, probably don’t go on weekends. I took a cable car both ways, but it would’ve been nice to just do this one way. However, even with the cable car, it still seems to be a lot of walking.

Temple of Heaven: I went here later in the day, which probably improved the experience a lot. There weren’t many crowds. The Temple of Heaven looks pretty similar to a UFO and I think the blue colors are great. The park is really large and easy to get lost in, but you probably won’t get lost forever because there are maps. There is a lot of really green grass and other things like a rose and flower garden.

798 Art District: I think this is a place where New Paltz students belong. It’s super artsy and there is a lot of cool graffiti. The outside area is filled with old factory buildings that are no longer in use. Inside of this, there are a bunch of art museums. I wish I spent more time there because there is a lot to do, but I got there pretty late in the day.

Panjiayuan Market: This place was only a subway stop away from me or a 20 minute walk. This is a great place for buying souvenirs. It’s a very large market area. Some of it is indoors, but most of it is under a very large tent. You have to haggle a lot, but it’s not too difficult. You can often go for about half of what they say the price is, and usually end up somewhere in the middle. Don’t be afraid to just say no. They might even call you back and agree to your price. Other places nearby are probably selling the same thing. If it costs more there, you can easily go back. It’s pretty cool when you realize that you just spent way less than what they were asking for. A calculator is passed back and forth to argue prices. Some guides tell you to go super early for the best deals. I don’t think this is necessary, but it might depend on what you’re looking for.

Lama Temple: This place wasn’t too crowded. There are some huge Buddha statues, including one that is four stories high (photos of this are not allowed, but many people seem to take them). It’s an actual place of worship and many people burn incense. In general, the architecture is really pretty. The architecture is similar to most of the temples in China, but I think it’s slightly more interesting.

Jingshan Park: Great views of Beijing, especially the Forbidden City. This probably won’t be a fun trip if the sky isn’t clear. It can be a lot of walking to the top, but if you manage to find the shortcut, it’ll be a better experience. Beihai Park: I went here while it was raining and after most of the attractions closed, but it was still pretty cool. Since I went at this time with this weather, it was pretty empty, which improves the experience a lot. I’m not sure if it’s surrounded by water or if the water is surrounded by the land, but you can take many boat rides across this water. It’s definitely easy to get lost. I took the subway there and a taxi home because I couldn’t figure out which exit was closest to the subway and when I asked for directions to the subway, I was just told that it was very far. (Taxi’s here are much cheaper than taxis in NY. I spent ¥40 for a 40 minute trip, which is about $6, that’s less than an express bus.)

Old Summer Palace: I think this just ends up being a lot of walking, even if you do take a boat ride. Most of it is burned down because of some wars that happened. There is a pretty cool maze area that you should definitely check out.

Forbidden City & Taimenian Square: Okay so maybe it was really early, really hot and I didn’t wake up early enough to eat breakfast, but this wasn’t really that exciting. It is very crowded, especially earlier in the morning. There isn’t really much to it. The architecture is nice, but not very different from other places including the Temple of Heaven, Beihai Park, Jingshan Park, and Lama Temple.

Ming Tomb: This probably isn’t a place I would go to on my own, but it was part of my Great Wall tour. This is where emperors are buried. I actually don’t know much about it. It would probably be higher on this list if I knew more. Jade Factories: This definitely isn’t a place I’d go to on my own, but it was part of my Great Wall tour. It might be cool if you have a lot of money or are into jade, but neither of these relate to me. Their goal is to sell you some stuff (don’t do it.)