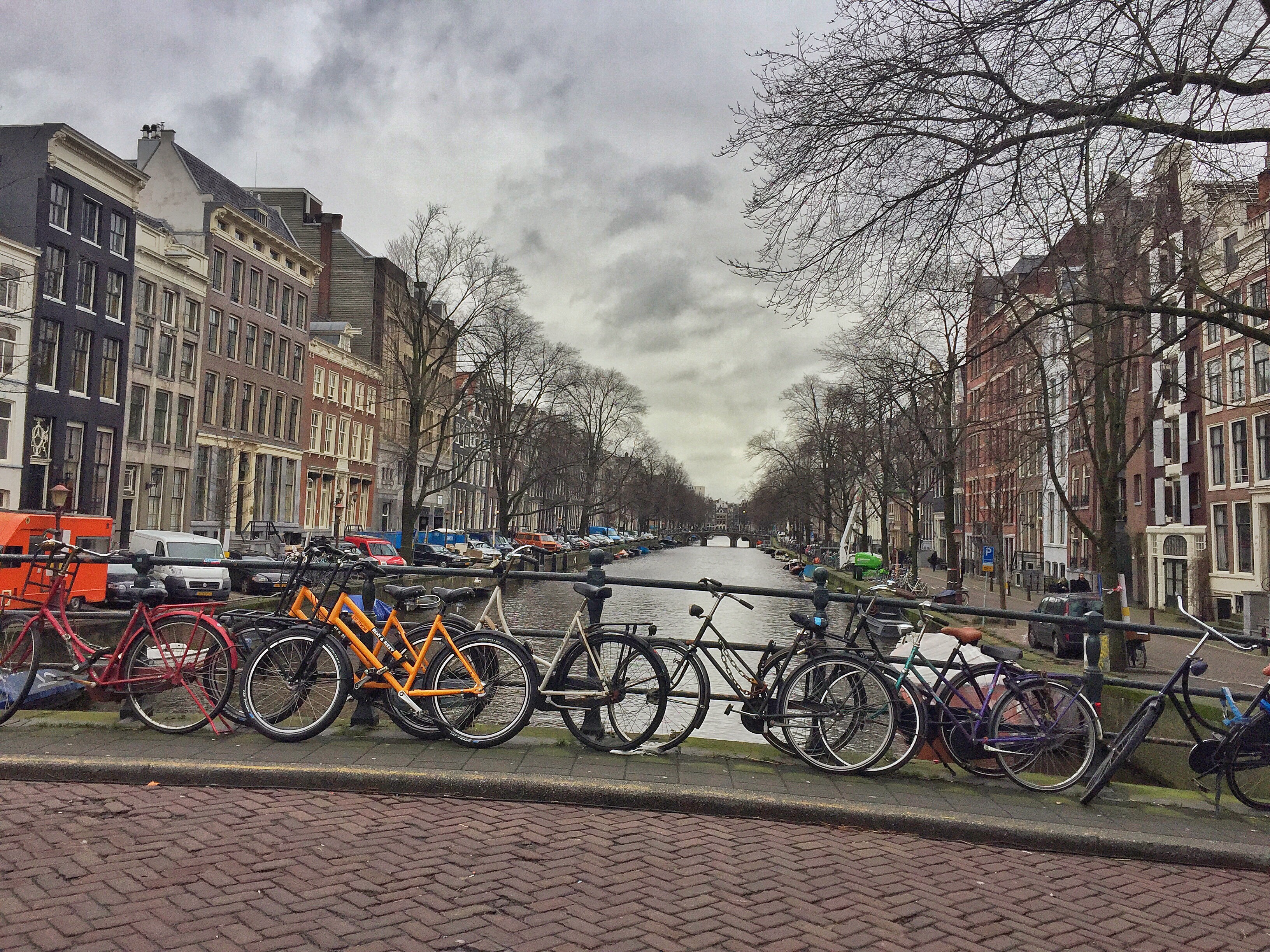 It’s a Little… Too Clean

The above title turned into our joke of the weekend when, on an early Friday morning, we arrived at our meticulously clean AirBnB in Amsterdam, Holland. A quick and painless bus ride brought us into Amsterdam at about 9AM and from there our explorations began.

The goal for Friday was to visit the Anne Frank house, the hiding place of Anne Frank and her family in the Netherlands during the Holocaust. This visit cost €9 and was such an eye-opening experience that I would pay to see it all over again. As sickening and sad as the entire experience was, it is necessary to understand what these people were put through.

The Anne Frank House is very well-devised, as visitors are led through the house in a maze-like fashion from the bottom floor to top floor. Along the walls are quotes from Anne’s diaries and photos of her, her family and the others that stayed with them and cared for them. We were able to walk through the secret opening and up the stairway which was so cleverly hidden by a bookcase. It is stated within the house that it is still unknown to this day who betrayed the family’s location.

On the walls of the room that Anne shared with Fritz Pfeffer (a dentist and acquantance of the Frank’s who joined them in hiding), there remain the original decorations that Anne pasted up to make the small space more enjoyable. These pastings were paper clippings from newspapers, magazines and ect.

We learned about the extent of the precautions they had to took in order to stay completely hidden: blackout curtains and windows, wariness of every movement that would make a sound, and of course they could not leave the house so they relied wholly on Otto Frank’s employees of his company, Opekta — the office of the company was in the bottom floor of their hiding place.

There were two defining moments from the Anne Frank House that I will not forget. The first was on the top floor of the house, where there was a video of Otto Frank, the only surviver of the entire family, who spoke about reading Anne’s diary for the first time after returning to the house. He states how little he truly knew about Anne’s thoughts, how deep they were, and his surprise at the existence of such desires and beliefs. Lastly, Otto directs his harsh gaze into the camera and states clearly that a parent will never truly know their child.

The second defining moment, which is quite painful to think about, is on the very bottom floor, at the end of the “maze.” There is a large screen and on it are famous and everyday people speaking about their experience at the Anne Frank House. John Green comes onto the screen, reading a section of his novel, The Fault in Our Stars, “The book was turned to the page with Anne Frank’s name, but what got me about it was the fact that right beneath her name there were four Aron Franks. FOUR. Four Aron Franks without museums, without historical markers, without anyone to mourn them.”

After this visit, it was difficult to know how to feel aside from feeling guilty, disgusted and undeserving… but our day had to go on.. so on it went.

Now, onto the cheese…

Throughout our entire weekend in Amsterdam, we happened upon about at least three Amsterdam Cheese Museum’s per day, and in each shop there are free samples for just about every type of cheese. Of course, I went into it telling myself that I would only look and not taste, as I avoid dairy when possible (I am very excited to try Ben and Jerry’s vegan ice cream!). But this did not happen, I tried all of the cheeses, and my stomach was not pleased.

Anyhow, there is more cheese in this world than I ever imagined… see the blue, green, and pink cheese below!

Below is one of the many canals in Amsterdam by night.

The following day, we saw a fairy tale-like castle. Thanks to Ema, who discovered this quiet Amsterdam excursion online, we found ourselves in a small port town called Muiden. Walking through the quaint, yet empty streets of Muiden felt as though we were Harry Potter in the Deathly Hallows when he visits his mother’s grave in Godric’s Hollow. The lack of human activity paried with gloomy weather and colorful storybook houses made for an eerie walk through town to get to Muiderslot.

Similar to the town, the castle looked as if it had just popped out of a storybook.

After sitting in this small opening, we read the sign beside it, which informed us that this opening was actually a toilet… behind me an open space which goes right into the moat. The sign actually explained that all the ‘toilets’ in this castle were holes that dropped out into the moat — which is bacteria infested and dangerous to those who touch the water or fall in — another form of protection for the castle.

The castle visit was beautiful, as it is directly on the water and there was so much history and warfare logic to it. Now that we live in a “civil” society, it is odd to think of everything in terms of defending yourself from the enemy in regards to your home. Every part of the castle was constructed around a warfare society. (This seems obvious, but until you’re actually observing it for yourself, you don’t think about the extent of such a lifestyle.)

After our castle and eerie small town adventure, we found our way back to Amsterdam and, intending to go back to our AirBnb to make ourselves dinner, we headed for the tram that would get us there. This proved to be impossible as we found ourselves blocked off by police at every roadway that we needed to take. It turns out that there was a PEGIDA (anti-muslim group which believes in restrictive immigration laws) demonstration happening that very day. We had passed a demonstration on the way to the castle — which was the counter-demonstration.

There were police everywhere, on horses, in vans, on foot, on mopeds/motorcycles (not sure), and in a helicopeter… we weren’t sure whether we felt safe or concerned as we were still unsure of what was going on at this point. When we finally walked the very long way around what the police had blocked off, we were just approaching our tram stop as a police-escourted line of buses filled with demonstraters drove by. As they did, people on the streets — who clearly knew what was going on — shouted “fuck you” and threw up their middle fingers to those in the buses and those on the buses did the same to the street-goers. It was a very interesting experience.

We then realized that the demonstration had completely backed up public transport and decided to stay in the center for dinner in order to make the reservations we made at Amsterdam’s ice bar: Xtra Cold Icebar Amsterdam.

As the name of the bar proclaims, this ice bar was extra cold, -10° celcius, to be exact. Included in the ice bar experience package are three drinks of your choice, an extra coat, and gloves. Every single thing was made of ice, including our glasses, which eventually melted in our hands.

Below is a colorful photo of Becca in the ice bar.

Once we were no longer able to feel our fingers and toes, we took our leave and headed home for the night. The day’s adventures had taken a toll on us and we were ready for bed!

The museum offered so much detail and background to Vincent’s (yes, we are on a first name basis) life that I found his art to be even more enjoyable because we were able to understand his inspirations, thoughts — from his letters to his brother — and desires. Van Gogh worked quite hard to get to the skilled artist that we now know him as today. Before visiting this museum I had thought that Vincent Van Gogh was just some talented, insane artist who cut off his ear… but what I found (through the quotes provided on the walls throughout the museums) was that I shared many thoughts and beliefs with Van Gogh and that he led a difficult, yet determined life for the love of his work.

After a quick (homemade) lunch break, we walked to Vondelpark, which was a few blocks away. Sunday was one of the few fully sunny days that we have seen here in Europe so far — so the park was full of runners, bikers, people playing ball, and so on.

We then walked around the city for a while longer and accidentally wandered into the red-light district… which was not at all intimidating, but rather, laughable, as there are mostly naked women in window displays… It was a funny thing to see.

All in all, Amsterdam was an experience. Hello! My name is Katie, I am an English major and double minor in Environmental Studies and Law and Politics. I am very excited to be living in Belgium with a host family for four months! I will be studying politics, law, and French whilst abroad and I hope to discover Europe and more about myself in the process!

Next ArticleWhen in Vienna, SCHNITZEL IT UP!