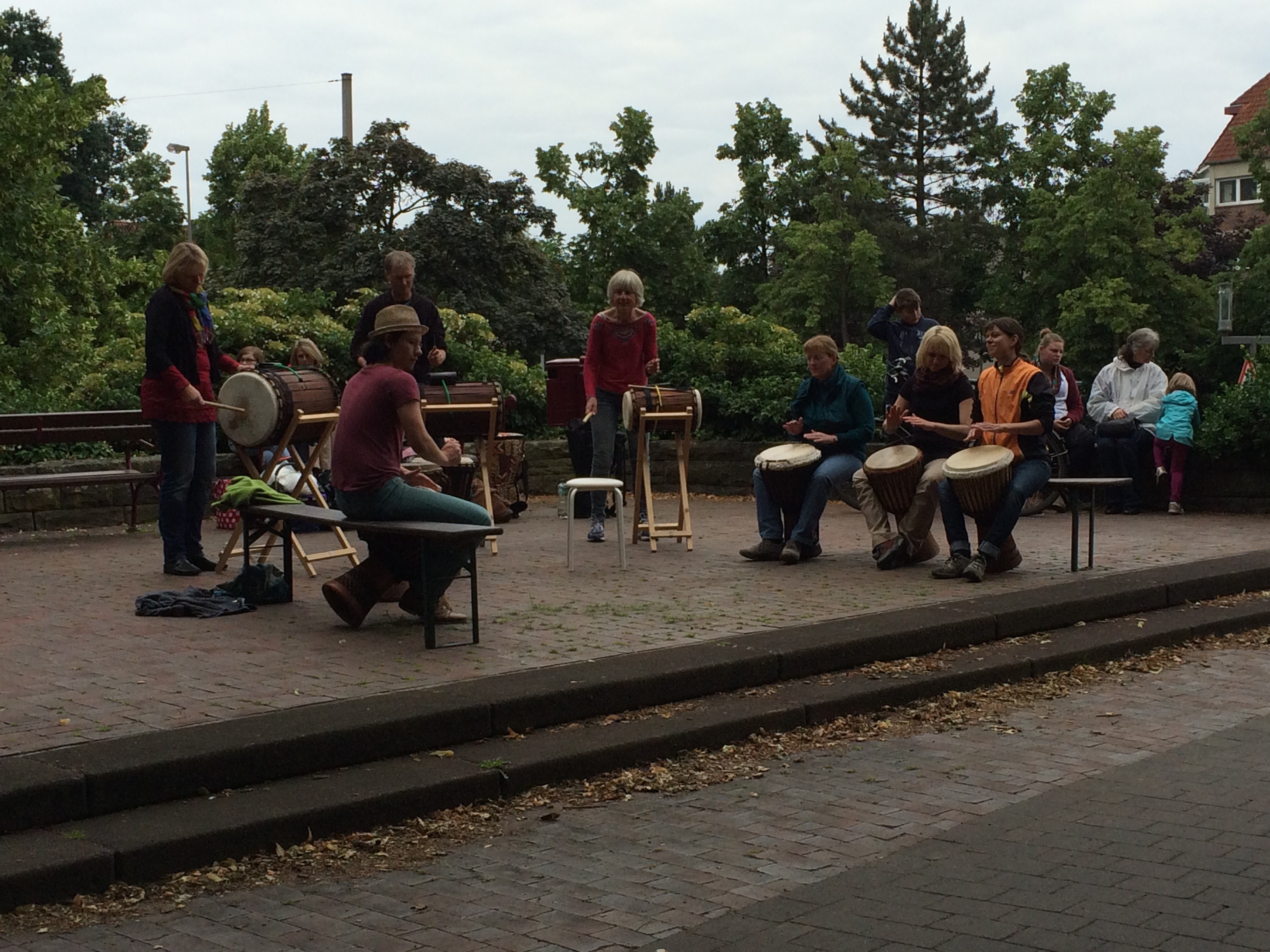 I’m really behind on these because I got the blog more than half way into my program and I’ve been pretty consistently busy since I got here. I go home this coming weekend and there’s no way I can write a post about every week that’s passed in that time, so the next two posts are basically going to be just the highlights of the last month 🙂

Weeks two and three were fun (as were all of the other weeks). Week two consisted of a movie night, a concert at the music school, a trip to Bremen, and a free swing dance!

The concert at the music school was really cool for me, because it was a guitar concert, which is an instrument that I don’t tend to listen to very often. As a music major, going to live music events is an important part of our curriculum, so getting to do that even while abroad was really cool, and to see the similarities and differences between concerts at the Musikhochschule and our own music department at SUNY New Paltz. (And besides, who doesn’t love a free concert?)

The trip to Bremen was also really cool, and it was only a week and a half after I’d gone to Amsterdam, so getting to travel a lot was really awesome. I’m still not entirely sure what exactly Bremen is famous for, but it was cool to get to see cities other than Münster. There was a

Stadtführung, or city tour, lead by the teacher from Kapito who was running the trip, but my friend Robynne and I decided to just explore the city on our own. We looked at the map that we had gotten and went to the Schnoorviertel, which is a really old harbor/shipping town. It was beautiful, the way that the architecture mixed really old buildings with some modern ones, and the shops were all very cute. We wandered around for a while and ended up going in a circle back to Schnoorviertel. While we were wandering, it had started pouring, so we ended up going into a random restaurant for lunch, which ended up being pretty good. After wandering for a while, the school had a trip into a museum; the Übersee Museum, a natural/cultural history museum about cultures all over the world. It was really interesting, the way it went from ancient to modern times, and it was really fascinating to get to see artifacts from cultures from so many different places.

The Sunday that ended week two held something pretty awesome as well: a free public swing dance! As a member of the New Paltz Swing Dance e-board (yes we have a swing dance club. Shameless plug that everyone should join because it’s tons of fun and we have lessons), I couldn’t resist going when I read about it on Münster’s Lindy-Hop website. It was an outdoor afternoon dance with a small stage set up in a park, and it wasn’t too far from my house so I decided to go. At first I was terrified to ask anyone to dance, because while I know how to say “would you like to dance” in German, it’s still a new language and a new culture, and I had to get a feel for it first. After observing from the sidelines for quite a while, a man (he turned out to be from Holland and his English was better than his German, so that made it easier for me) asked me to dance and told me that I’m never gonna get to dance if I just stand there and watch. We had a good few dances before separating, but that was just the small push that I needed. I asked someone else to dance, but he ended up not knowing swing, he was just there (I’m not really sure why), but we chatted for a while and then I was asked to dance by someone else. That ended up being a really great dance, which is always fun. I absolutely love swing dancing, so getting to go while in Münster was a wonderful experience. After a short break for ice cream (it’s become it’s own food group for me here), I sat down at a picnic table and just watched others dance for a while. It’s interesting to see how the locals here dance, because they have a much different style than what I’m used to. A little later I made awkward eye contact with someone and we danced. He clearly didn’t know how to Lindy, but that’s alright. I got sucked into a conversation about the state of the world and differences in cultures, which was pretty interesting (though he repeated himself quite a bit), and it helped me with my German since he didn’t speak any English. I danced with one more person (another really good dance) and then headed home before it started to get dark. It was a really fun day, even though sometimes I’m a little too awkward to function in situations like that on my own.

In week three, I found a really interesting shop, saw La Boheme at Theatre Münster, went to the Planetarium (admittedly I slept through most of the show), there was a flea market at Schloss Münster, music on the Promenade, and another swing dance! Short explanation of the above photos: It’s half Disney/Mickey Mouse museum, and half shop with really interesting things like chairs that look like Prinzipalmarkt, or various garden gnomes.

La Boheme was super cool. I’ve been trying to go to more fully staged operas lately, and so I had to go while in Germany. Since one of my majors is classical voice performance, it should be a given that I see a lot of opera’s, but since they can be pretty expensive, I’ve actually only ever been to three (and they were all within the past year). I’ve been performing in opera’s since elementary school, but through a small workshop near my hometown, and we didn’t do fully staged opera’s often. Because the Theatre has a discount for college students (our New Paltz ID’s worked!), we got half priced seats, so we managed to sit in the eighth row for only 20 Euro. The performance was great, though at the end everyone started clapping in sync and it was the strangest thing.

The following weekend was one of Europe’s largest outdoor flea markets. Unfortunately, I was mistaken on where it was located, but we spent the day exploring the city and wandering around and eventually just so happened to come across it right in front of Schloss Münster (Schloss means castle in German. The Schloss is now the main building for Münster’s University). We found the flea market about 5 minutes after it was scheduled to close, but many of the vendors hadn’t yet started packing up, so we still found some pretty cool stuff. Walking home from the flea market, I got to experience part of “Music on the Promenade,” which is an event where all along the Promenade are various artists playing their music. Since I live along the Promenade, I got to see quite a few talented people along my way. My favorite was probably a drum circle at the very end, because they had really interesting rhythms, and I find it to be really fascinating the way that they could communicate with each other to play the songs without saying anything. It reminded me a lot of doing improvisational drumming in my music therapy classes, which I love doing. I don’t think they were improvising, but the style was very similar.

The next night, there was another swing dance! This time it wasn’t free, but it cost only 8 Euro for a whole night of dancing, and there was also a buffet. (I didn’t necessarily like the buffet food, but there was some fruit and yogurt, so I guess I can’t complain) Much like the first swing dance, I had pretty cold feet about asking others to dance. This time, however, my host family had come with me. They didn’t dance at all, but they came for a little while and we hung out. I only got one dance in before they left (I spent a really long time not dancing), but they had to go since it was a school night. After they left, I ended up getting in quite a few good (and quite a few pretty bad) dances. There were also quite a few times when I debated just leaving because it was pretty overwhelming. The first swing dance had been outdoors, but this time it was in a small venue and there wasn’t much free space to breathe. I ended up going outside for a little while, when one of the locals was talking to me and saying that i shouldn’t be nervous to just ask people cause once you get to know them everyone in the community is really nice. That didn’t surprise me because swing is generally a really great scene, but it was a good confidence boost. I still felt pretty overwhelmed though, so I took a walk around the block to get some fresh air, and then got a few awesome dances in before going home.

On a completely and totally unrelated note: One thing I do have to say, is that the food here is amazing. I haven’t yet had a meal that I didn’t like (with the exception of maybe one, but I liked half so that can count), which is saying something considering how picky I am. The food is also pretty cheap, at least at the grocery store. In restaurants, the prices are similar to American pricing, though you definitely get more for what you pay. I’ve had to get a to-go container nearly every time I’ve gone out to eat, and that’s great because then I have lunch or dinner for the next day! My name is Krista Miller and I'm super excited to be studying for 6 weeks in Germany this summer. I'm a Music Therapy and Voice Performance major, with a minor in German. This will be an exciting new adventure for me, and through this blog, anyone can follow along!

The Land of Ice Chronicles: Adjustment 101 [The Party and The After-Party]