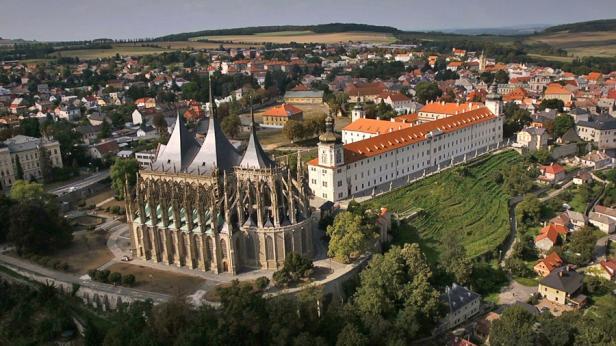 An included part of the program was a day trip to Kutná Hora: a city situated in the Central Bohemian Region of Bohemia, which is now part of the Czech Republic. Whilst there we toured the famous Bone Church, St. Barbara’s Cathedral, and crawled through the Silver Mines. The story behind the Bone Church, more correctly called the Sedlec Ossuary, is that, in the 13th century, Jindřich, the abbot of Sedlec monastery, returned from a visit to Palestine with a pocketful of soil and sprinkled it on the cemetery surrounding the Chapel of All Saints. Seeing that Israel is seen as the holy land, this direct association with the soil of the holy land led to the graveyard becoming a sought after burial site among the aristocracy of Central Europe. At the time of the thirty years’ war in the 17th century, the number of burials outgrew the space available, the older remains began to be exhumed and stored in the chapel, and it’s estimated that the chapel now contains the bones of up to 40,000 people. Although this church was very eerie, I thought it was wonderfully dark and cool. Definitely the best part of the day for me.

Next was the cathedral. St. Barbara’s is known as the most spectacular gothic cathedral in the Czech Republic, a land noted for its Gothic cathedrals. In the late 1300s St. Barbara’s was founded by the rich mine owners of Kutná Hora. St. Barbara is the patron saint of miners, and many of the interior adornments reflect mining life. Stained-glass windows and frescoes depict winches, ore-trading, and medieval minting techniques, and the ceiling murals include depictions of the miners’ guild coat of arms. It was very awe-inspiring and a nice introduction to the mining history that we’d soon be immersed in.

Let me first start by saying I am claustrophobic… I do not like tight clothes, spaces, let alone narrow, dark tunnels 35 meters (114 feet) under ground. Fear was crawling all over my skin just thinking of touring the Silver Mines. The tour begins in the courtyard of Hradek, with a small display of mining equipment and then progresses to the massive horse-powered winch that was used to lift a ton of silver ore at a time to the surface. We then got dressed in white cloaks and helmets with torches on the top. Our tour guide giving his first tour in English and doing a great job.

The first part of the tour is a climb down a modern steel staircase of 160 steps, approximately equivalent to a six-story building. The tunnel grew smaller and smaller the further we went and the lowest point was around 120cm/4 feet. I liked my helmet more and more every time I scraped my head along the top of the shaft. The tunnel opens out into another small cavern where the guide stops and asks everybody to turn off their torches, and then almost covers his, to show what poor light the miners worked in, and why their coats were white. He then turns his torch off completely to demonstrate complete darkness, which is unsettling no matter how much the logical part of your mind tells you it’s OK. We were in complete darkness in this chill cave for like 5 minutes which felt like 50 minutes. I spent this time practicing breathing exercises and avoiding thinking logistically about the predicament I was in.

I am actually practicing my breathing exercises as I write this, but I am so pleased because I really faced a huge fear and that is always a reason to be proud of myself. Making it through that tour, one which is so unique and important in the history of the city, really set the tone for why I came here—to the Czech Republic for this month: to get out of my comfort zone and really live, be alive. This trip has already changed my life and it’s only been four days! I hope I can handle all the rest that’s in store. Next ArticleMeine erste Woche! (And a trip to Amsterdam)