Waking up at 530 in the morning is quite early, but it’s alright when you know within six hours you will be swimming in the calm Red Sea. However, it does get a little frustrating when the bus you are supposed to take does not arrive until nine, when it was supposed to get there three hours earlier. But waiting around and having extreme patience is something one must learn to have when doing anything in Cairo I have come to find out. It is not weird or rude to be thirty minutes or even more late when you are told it will only take five minutes. This is just one of many cultural adjustments that I have been adapting to. Coming from a society that is very intense with strict rules, regulations and always demanding you to be on time makes for a big culture shock when it is the opposite.
Nevertheless, as our small bus bumped along the highway heading east I could not close my eyes as I took in the vastness of the Sahara. Once we reached the coast and started heading south to El Gouna the deep turquoise blue of the Red Sea shimmered in the sun contrasting the baked desert and tanned mountains to our right. The resort itself was a vacationers and travelers heaven. The beaches and pools were beautiful and between our buffet meals we were able to go snorkeling, see fish and coral, and watch dolphins chase our boat as they jumped out of the water. 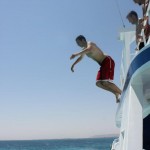 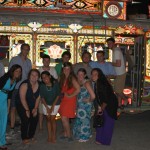 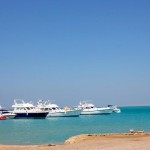 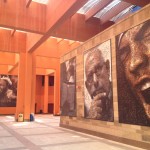 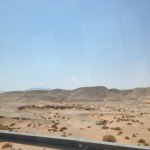 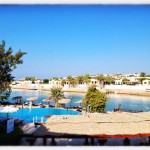 Now I am waking up early in the morning for a different reason though, it is time for classes. Because the weeks run from Sunday through Thursday, I have already had two days of classes and I am starting to get into a rhythm rather than run on a chaotic schedule. Hopefully, after a few weeks of classes and once I begin to grasp my schedule, I will be able to do some more traveling around this great Country!