As I looked out the window of the car while the taxi driver brought us to the edge of the city, the pyramids towered over the ramshackle dusty buildings like mountains overlooking a village. On our first day in Cairo we rode horses through the rundown city of Giza, on the outskirts of Cairo, and then into the desert towards the pyramids. After about twenty minutes, of sometimes chaotic galloping, we arrived at the base of the first pyramid on our trip. The structure and magnificence of all the three great pyramids at Giza is unbelievable and breathtaking. Not only were we able to freely move about the desert as we journeyed from pyramid to pyramid but we also entered and traveled beneath the pyramid through a narrow staircase to view the underground world.
When viewing such amazing wonders the dry heat of Egypt becomes somewhat of an afterthought. However, by mid afternoon the heat catches up with you but for some reason hot coffee still seems attractive as you sip it out of a small cup in the air conditioning. With all the marvel of the pyramids and rich history, the city streets of Cairo in and of itself has a lot to offer. The city and people alone are a wonder of culture. This city with such a huge population, does not disappoint in excitement and chaos
Now that I have been here for four days I am about to move into my room at the American University in Cairo and begin school, or at least the study abroad orientation. However, I am glad my dad and I made the decision to travel together to Cairo and spend a short while to explore the city before I go to school and he goes on to travel to Beirut. Even though I have only been here for a short while, it feels as though I have been walking around the streets for a couple of weeks. For the moment though, this part of the journey is over and the next step is about to begin and I sure unimaginable surprises, excitement and adventures await. 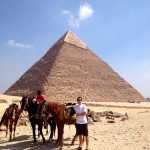 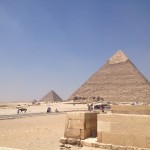 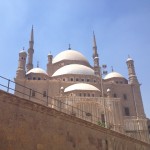 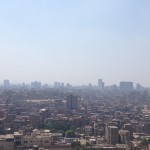 Next ArticleLess than One Week!