We’ve been off from school for Semana Santa (Holy Week), which is a huge celebration in Spain. The streets are filled with processions. Unfortunately, a lot of the week was cold and rainy, which cancelled some of the processions. Nonetheless, the streets remained so packed at night that we could hardly walk anywhere near the Cathedral. It actually turned into quite the struggle because our favorite tapas restaurant was right in the middle of the madness. But we caught some great views of midnight processions!

This leads me to talk about one of the most important parts of our lives in Sevilla: the mighty Taberna Coloniales. We LOVE this place. Maybe I haven’t discussed the culture of Tapas yet, so here you go. In Sevilla (Spain’s most tapa-ified city) tapas are everywhere. Tapas are just small portions of any dish. It’s great because you can try multiple dishes and share with friends. We college students also love it because they’re usually 2.50 euros (yeah!). If you don’t get a tapa, you order a ration or half-ration. But rations are huge and are also meant to be shared. It all feeds into the social culture that southern Spain is known for. The weather is warm, everyone is outside, eats outside, drinks outside. All restaurants/bars have outdoor seating. It’s the Tapa way of life.

During our time off for Holy Week, we went to a Sevilla soccer game! That was awesome. The stadium is actually right near us so we had no problem making the trek on a rainy day. Sevilla played Mallorca, and of course Sevilla won. There was so much energy and singing/chanting. I’m glad I took part in a real Spanish soccer game. Who knows, I might take interest in watching soccer now! 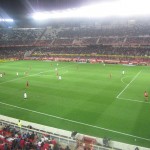 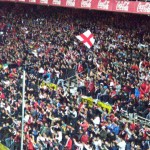 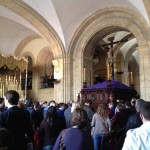 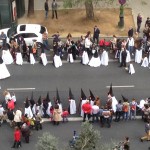 In addition to the week off for Holy Week, my two classes were canceled the day before break because of Spain’s general strike. Although I didn’t see all the strike action, the aftermath left Sevilla’s streets quiet and deserted. There was a lot of student involvement from what I could see. In days prior, there were students with loud phones protesting through the University. I’m still not quite sure about the details of the labor strike. I guess there are political issues here just as there are anywhere in the world. It’s cool to say I experienced a bit of it.