I’ve only been in Madrid for 5 days and it already seems like at least a month has gone by! I’ve been running around trying to get everything sorted out and settled before my official classes start on Tuesday, September 7th, and already there have been so many road blocks and new experiences and exciting people. I will try to condense everything so as not to bore you with pages and pages.

I want to start by describing the week before I left for Madrid and the first day I arrived just because I think the preparation before the storm is an important part of the study abroad process.

I’m not your traditional study abroad student. Most people chose to go to places that they’ve never lived in before. I chose to go back to my first home. I was born in Madrid and lived there with my parents and family until I was 6 and I’ve been living in Poughkeepsie ever since and visiting Madrid once every couple of years or so. To me this is an experiment. Since I was very young I always wondered who I would have become had I stayed in Madrid my whole life and now I have this amazing opportunity to live in Madrid for a year. Though I am fluent in Spanish and have family as a sort of safety net in Madrid, leaving the comfort of New York was no easy task. For the entire week before I left I was a complete nervous wreck, and the day of my flight I was so nervous I felt physically sick and couldn’t eat or sleep. It was a complete shock to me that I was so afraid of going back to a place that I have loved for years.

But going back to Madrid this time was completely different than it was when I was a kid. This time I was leaving my best friends, my boyfriend, my family, my town, my college, my bands, my life. And this time I would be in Madrid for a whole year which for the most part would be dedicated to studying economics at la Universidad Carlos III. It isn’t going to be a complete vacation!

When I landed in Madrid I was reintroduced to my old home as an adult. My first thoughts…. am I going to be able to find an apartment? How expensive will it be? How hard are the economics classes going to be in this university which is ranked on of the best for economics in Europe? I’m going to have to get a European phone! How am I going to get a bank account? etc, etc, etc….

So far I’ve succeeded in only one task…. getting a cell phone. But I’m well on my way to get everything else settled.

Since this exchange program between New Paltz and UC3M (Universidad Carlos III de Madrid) is completely new, there are no precedents. Thankfully, there are 3 other economics majors from New Paltz who are on the adventure with me and we’ve been helping each other out at every step.

Currently, I am sharing a hostel room with Jules while she, Madeline, and I look for an apartment. The fact that this hostel is absolutely beautiful and has the best shower I’ve ever been in (for only 21 euros a night per person) hasn’t been giving us to much incentive to hurry the apartment searching process. Although, it has been uncomfortable not having a fridge and not really being able to buy groceries. (The hostel name is Carlos III for those of you interested in visiting Getafe)

Since the university is in Getafe, a small city/town 20 minutes south of central Madrid we haven’t exactly decided whether we’d like to live in Getafe near the school or in central Madrid near el Parque Retiro, and all the famous museums, and night clubs. We’ve talked to some of the European exchange students in the ERASMUS program and most of them have opted to live in central Madrid. We’ll be seeing 3 apartments tomorrow: 1 in Getafe, and 2 in Madrid so hopefully we like at least one of those. There is a train that runs from Atocha in central Madrid to Getafe that takes about 25 minutes. By the way, if you’re wondering why we didn’t decide to live on campus… it costs almost $900 a month, while living in an apartment will give us a lot more space for less than half the price!

So although our economics classes don’t start until Tuesday, we started our Spanish language immersion program yesterday. It’s 4 hours a day of Spanish class for 2 weeks!!! It’s a bit intense but I really like my class and my teachers. I’m in the intermediate 2 class with all German speaking students. It’s pretty interesting hearing Spanish in a German accent. We have two teachers for the class and both of them are AWESOME! They only speak Spanish but they are really funny and very animated and passionate.

That’s probably the biggest difference I’ve noticed in Spaniards so far. They are all very animated when they speak and they all have similar intonations and hand movements. Some “Madrileños” can seem rude and harsh when you ask them for help, but a lot of the people I’ve met are really accommodating and will help you a lot. We met this guy Antonio at a rental agency in Getafe who was very charismatic and clearly was THE guy to know in town. As he was showing us around town people in the street would say hi to him and stop to talk. He was quite the charmer and very helpful. We also met a character in Plaza Mayor where we stopped one night for paella. He was our waiter and he called himself “Magic Luigi” and apparently teaches salsa classes in Madrid and has a record coming out. I’m not sure how much of it we believed, but he was funny nonetheless…

And then there’s the man who works at the front desk of the hostel who plays Spanish guitar and sings during his night shift! I brought my guitar so I’m thinking of joining him one night before we move out.

Anyway, I’m going to end my first blog on that note, and leave you with some pictures of the beautiful campus of UC3M. No offense to New Paltz, but it is definitely an upgrade :p

I’ll talk more about Spanish food and the culture that I observe on my next blog! 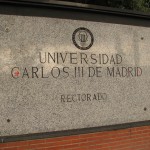 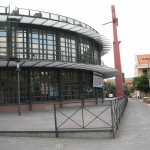 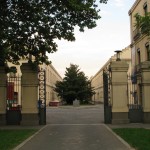 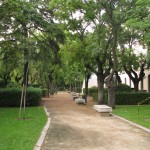 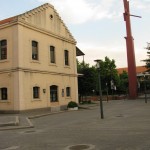 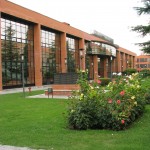 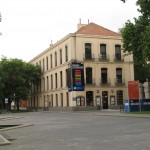 Back to “The States”