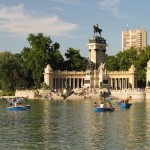 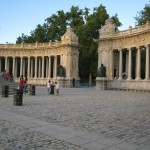 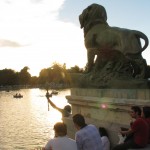 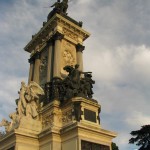 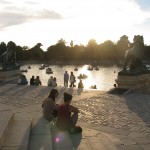 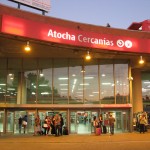 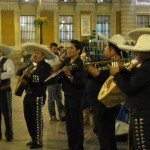 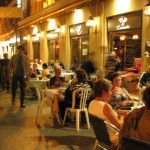 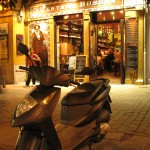 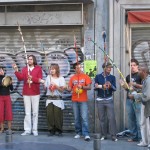 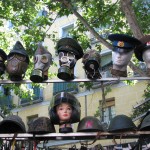 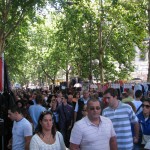 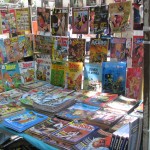 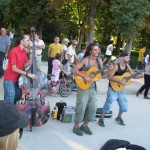 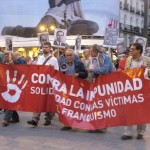 I wish I had time to write a blog entry more than once a week because so much happens in one week that it’s hard to recap everything….

Last Sunday I visited the Retiro park in Madrid for the second time, but this time I took some pictures! It is a humongous park, comparable to Central Park in New York City. I left Getafe around 5pm and arrived at the Atocha train station close to 6, then waisted some time walking around lost as usual, but I ended up running into this huge outdoor book sale. Most of the books were in Spanish, but I also found A Farewell to Arms by Hemingway so I was surprised.

When I finally reached the Retiro I walked around this man-made lake where people were rowing boats. Around the lake there were a lot of street performers. I took some video of this one band covering a Bob Marley song. They were pretty good. I also spotted Minnie Mouse and Barney walking around. It was pretty funny.

I ended up finding a place to sit underneath a tree and I did some homework and wrote a letter back to the U.S. For only 78 euro cents you can send a letter to the US and it takes less than a week! It’s great.

On Monday I started my first week of classes without Spanish, and for the most part my week went pretty well. I start most of my classes at 9 or 10:45 in the morning and get out either by 12:15 or 2 and then have the rest of the day to nap, or be productive….

On Monday I got a pet fish, Norton! He’s adorable. He’s a telescope eyed goldfish and has these HUGE eyes and tiny little body. Although he has such big eyes, their positioning makes it hard for him to see straight ahead of him so I have to direct him with my finger in order for him to find his food. He’s really dumb but very cute.

On Tuesday, I started my documentary film class and I LOVE IT!!!! It is so much work but it’s a lot of fun. For this one week I had to watch 3 full length documentaries just to catch up on the past two weeks, and I had to write a paper on what we had learned the weeks I had missed, and I still have to analyze a short documentary for this coming Tuesday.

On top of all the individual work, I am working with my group to produce our own documentary. Our topic is the aftermath of dictatorship in Spain; how Franco has affected people’s lives and how Spaniards deal with such a negative past. The crazy thing is that when we all went to meet in Sol (central Madrid) to discuss our project, we landed right in the middle of an anti Franco protest. Members from la Asociacion para la Recuperacion de la Memoria Historica (directly translated: Association for the recuperation of historical memory) were there with posters of family members that had been killed during Franco’s reign and we’re protesting against the reopening of the monument to Franco at Valle de los Caidos (Valley of the Fallen), where Franco is buried. We met a lot of great people that were very eager to be interviewed for the documentary. We even met Emilio Silva, the author of the book “Las fosas de Franco” (The mass graves of Franco) which I’m reading right now. Everything seems to be fitting right into place with this documentary project and I’m really excited!

As for my economics classes, I’m more worried. They all seemed reasonable until Friday when my econometrics professor went over the first problem set and I was completely lost! And of course I was the only person lost in the class because they had all learned all these formulas in their previous classes. Even though I’ve taken econometrics before in New Paltz I had no idea what was going on so I’m pretty disillusioned right now. I have a quiz on Friday and I’m probably going to have to stay in my room studying all week in order to pass. Not fun.

What was fun was Friday night. Me and the girls from New Paltz along with an Italian girl and a girl from Denmark that we both met at UC3M went to our first Spanish concert, with Spanish music. Believe me its actually rare to go out at night in Madrid and hear Spanish music. It’s insane how many times a day I hear Lady Gaga. My neighbor sings “Alejandro” every day, and unfortunately for me the walls are paper thin. Spain needs to start embracing Spanish music more because the band we saw on Friday, El Sombrero del Abuelo, was really good! They were a mix of flamenco with funk and rock. I might go see them again in a month when they return to Madrid. In the meantime, Getafe is having a music festival this weekend so Madeline and I might go for a day and check out the Spanish artists.

Today I went to Madrid’s famous Rastro, this huge outdoor flee market, but I really wasn’t too impressed. I was expecting more antiques and hand made items but most of the stands all offered the same kinds of clothing, bracelets, etc. There were some interesting stands. For example, one was selling these strange gas mask/ military mask things… and there were a couple of stands that had some authentic Spanish comics… most of which were adult comics lol. Other than that I didn’t see anything out of the ordinary or anything that caught my eye. The highlight of my trip there was the food, of course 🙂 All the little restaurants around there were serving “tostas” which are open-faced sandwiches on baggette bread. They are delicious!