I don’t know if I’m experiencing culture shock, or just impatience, or stress, or all of the above. I never would have imagined that I could feel culture shock in a place that essentially is a part of my own culture. Maybe, I’ve just been spoiled by the relative ease of access to most things in the U.S.

Getting use to the way things run in this university is definitely challenging. Forget about the unlimited printing at New Paltz, and welcome to waiting in line for an hour at the print shop on campus and paying 5 euro cents per page, then being late to class…

Or waiting in line several hours a day at the bank on campus to open an account, just to find out they lost all of your paperwork, and you have to wait another hour…

Maybe, hopefully, I’ve just been having a bit of bad luck and these are all isolated incidents.

In fact, I was really surprised today when I went to the post office (correos) and I was in and out in 5 minutes! This definitely takes longer in the States. Of course, I have a horrible sense of direction and got lost going back to campus, so I was late regardless lol.

Today was the last day of our 14 day intensive Spanish immersion course and our big final is tomorrow night. I thought this class was going to be a breeze since Spanish was my first language, but having never taken an actual Spanish class, I was completely lost with most of the grammar. Unfortunately for me, 50% of the exam is grammar 🙁 but I’ll be studying all night tonight and hoping for the best! As much as I complained about having 3 or 4 hours of Spanish class a day, I actually wish it would have lasted longer than 2 weeks… Maybe I could have absorbed more information in a longer time frame.

Now that Spanish class is almost done, it’s time to focus on my regular classes! I’m taking two classes that I like A LOT: Markets and Environment, and Game Theory. Both are really interesting and thought provoking. Econometric Techniques is a little more…. technical. And at 9 in the morning, twice a week, it could be considered torture, but the professor is a really nice guy. I saw him during his office hours this week, because I missed class for a mandatory orientation, and he was very helpful. We’ve already started working on a time series project in class using GDP and interest rate data from a country of our choice. He suggested I do the U.S. because I’m the only American in the class. Cheap shot. I’m sure Spain was already taken anyway….

I also signed up for a class in the Journalism major, “Theory and Analysis of the Documentary Film.” I’m SOOOO excited to take it even though it has nothing to do with economics. I’ve secretly always wanted to be a documentary filmmaker so this class will give me the chance to make my own documentary. I’m thinking about tying economics into it in some way… With Spain being in a recession right now, like most of the rest of the world, there’s a lot of opportunity to “document” something.

Speaking of documenting, I admit I haven’t been the best “tourist” in terms of seeing all that Madrid has to offer. These past two weeks have been really hectic, trying to get settled into an apartment, and having Spanish classes at night. We did manage to go out to this cultural event in Madrid called “Noche en Blanco”. It’s an annual event in which all the museums are open as well as restaurants, clubs, exhibitions, stores… you name it. Problem was, there was too much to do and we couldn’t decide! We ended up dancing in Grand Via where a dj was set up outside. It was a lot of fun and there were A LOT of people! I’ll have to borrow some of Madeline’s pictures.

For now I have some pictures of the apartment Madeline and I are living in in Getafe, for those of you who are interested in seeing what a Spanish apartment typically looks like… As you can see, it’s very typical that people dry their clothes on the line outside on the balcony. Most apartments don’t have dryers… But hanging clothes outside works really fast, at least right now that it’s still hot!

I also added some pictures of Getafe, the supermarket, and my lunch the other day (Yummmm gazpacho!)

AND added a really cute picture of a dog I saw waiting at the window for his owners to come home… random, but adorable! 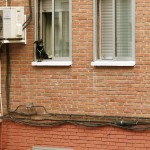 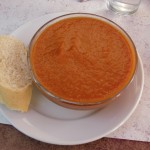 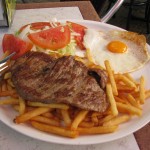 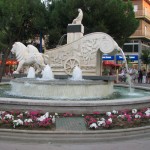 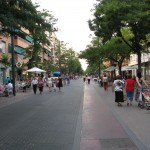 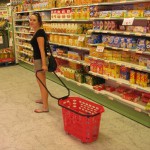 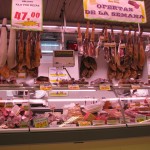 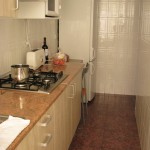 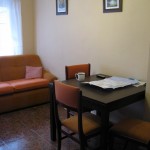 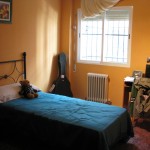 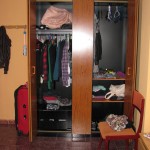 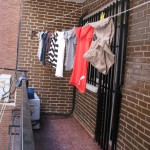